In a Harvard speech, Al Gore explains we treat the sky as a ‘sewer’

Society treats the sky like an “open sewer” – pumping carbon waste into the air the same way it pumped waste into waterways, and with the same results. People are getting sick, Gore explained, comparing the climate crisis to 19th-century cholera epidemics, including one in London where the outbreak was traced to a single water pump whose source was infected by feces containing the cholera bacterium. 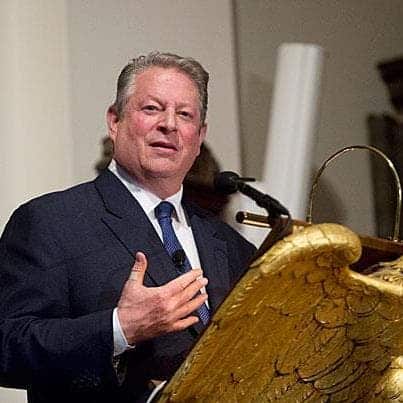 “We’re using the atmosphere as an open sewer. It’s functionally insane. It traps heat,” Gore said. “A lot of communities experience one in 100-year events, one in 1,000-year events … every few years.”

Gore delivered the speech at the inaugural Paul R. Epstein Memorial Lecture in honor of the former Harvard Medical School instructor and authority on the links between climate change and human health. He also praised Harvard’s efforts on energy issues, highlighting the founding of the Office for Sustainability and the enthusiasm of today’s students. He also mentioned student-led initiatives to convince universities, nonprofits, and even environmental groups to divest of fossil fuel-related stocks, but noted the problems that accompany these initiatives.

“It is a difficult question for nonprofits and universities,” Gore said, “and you will find even environmental groups that are passionately committed to doing the right thing, when it comes to protecting … their endowment, they want to make sure they don’t put it at risk so they can keep using it for the good purposes it was established for — totally understandable.”

Regardless of what you think of Al Gore and his activities, this is one really good metaphor, and I believe this is what we should take from his speech.