by Mihai Andrei
in Climate, Space
Reading Time: 3 mins read
A A
Share on FacebookShare on TwitterSubmit to Reddit 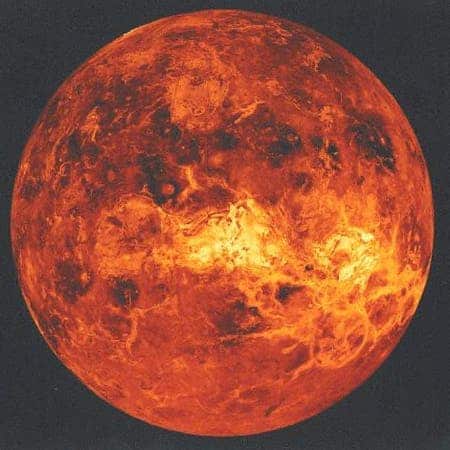 Despite the obvious differences, Venus has a lot in common with our Mother Earth, and we can learn a lot from our neighboring planet that can be really useful in the future; such is the case with the high-altitude layer of sulphur dioxide discovered by ESA’s Venus Express. This was a mystery that caused quite a stir in the scientific community, and was finally explained this week.

The importance it has for our planet is significant, because of the discussed plans of mitingating climate change that involved injecting our atmosphere with sulphur droplets. About the planet: Venus is covered by a sheet of acid clouds that block our view of the surface; the sheet forms at about 50 km from the planet surface, when sulphur dioxide from volcanoes combines with water to form sulphuric acid, one of the most corosive substances in the natural world. Any remaining sulphur dioxide is rapidly destroyed by solar radiation at 70 km, which is why the sulphur dioxide found at 90 km posed a total mystery; where could it come from ?

The answer came from a computer simulation conducted by Xi Zhang, California Institute of Technology, USA, and colleagues from America, France and Taiwan. They showed that some sulphuric acid droplets may evaporate at high altitude, freeing gaseous sulphuric acid that is then broken apart by sunlight, releasing sulphur dioxide gas.

“We had not expected the high-altitude sulphur layer, but now we can explain our measurements,” says Håkan Svedhem, ESA’s Venus Express Project Scientist. “However, the new findings also mean that the atmospheric sulphur cycle is more complicated than we thought.”

This yields a clear warning for us, that we have to broaden our understanding of the sulphur cycle before even dreaming to use it towards climate goals. Nobel prize winner Paul Crutzen is one of the people who openly supports injecting sulphur dioxide at 20 km above the Earth to fight climate change caused by emissions. However, this recent study of Venus shows that the results of injecting our atmosphere with such a substance may not be as successful as previously thought.

“We must study in great detail the potential consequences of such an artificial sulphur layer in the atmosphere of Earth,” says Jean-Loup Bertaux, Université de Versailles-Saint-Quentin, France, Principal Investigator of the SPICAV sensor on Venus Express. “Venus has an enormous layer of such droplets, so anything that we learn about those clouds is likely to be relevant to any geo-engineering of our own planet.”

This is one of the huge advantages we have from studying Venus: it allows us to experiment and observe what happens without actually experimenting on our world.