As CO2 builds up in the atmosphere, this warms the planet, acidifies the ocean and melts glaciers. It also promotes plant growth -- after all, that's why it's called the "greenhouse gas effect". A huge collaborative effort spanning 32 authors from 24 institutions in eight countries found that in the last 33 years the area occupied by vegetation has significantly increased.

As CO2 builds up in the atmosphere, it warms the planet, acidifies the ocean and melts glaciers. It also promotes plant growth — after all, that’s why it’s called the  “greenhouse gas effect”. A huge collaborative effort spanning 32 authors from 24 institutions in eight countries found that in the last 33 years the area occupied by vegetation has significantly increased.

“The greening over the past 33 years reported in this study is equivalent to adding a green continent about two-times the size of mainland USA (18 million km2), and has the ability to fundamentally change the cycling of water and carbon in the climate system,” says lead author Dr. Zaichun Zhu, a researcher from Peking University, China

“While our study did not address the connection between greening and carbon storage in plants, other studies have reported an increasing carbon sink on land since the 1980s, which is entirely consistent with the idea of a greening Earth,” says coauthor Prof. Shilong Piao of the Chinese Academy of Sciences Center for Excellence in Tibetan Plateau Earth Science, Beijing, China.

Adding a green surface area twice the size of the continental U.S. shouldn’t have gone unnoticed, so where is it? It’s everywhere because the effects aren’t dispersed. What this means is that trees, vegetables and all sorts of plants today grow more, bigger leaves. It is these leaves that produce sugars from sunlight, water, and nutrients, and more sugar is made when there’s more CO2 in the air — that’s common knowledge. This effect is called CO2 fertilization, and in a time when humans are spewing 10 billion tons of CO2 each year, it’s sure to contribute significantly to plant growth. 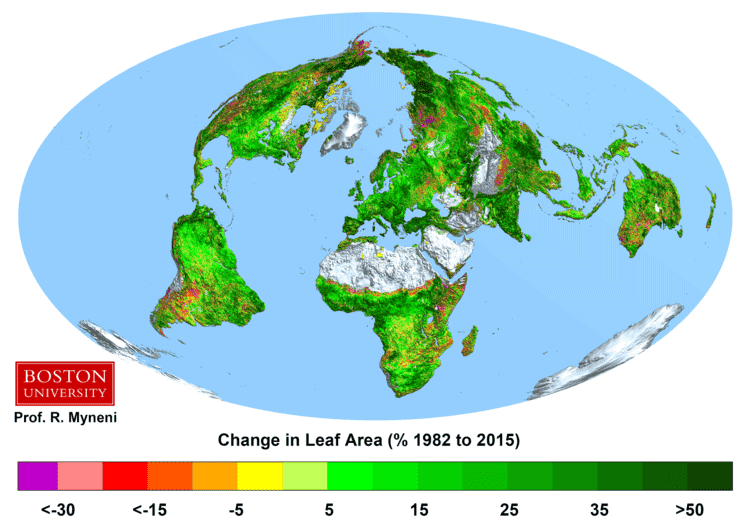 Theoretically, CO2 fertilization isn’t bad in itself. In fact, it’s been taunted as an argument that burning fossil fuels is actually a good thing by climate change contrarians like Rupert Murdoch. The discussion, of course, misses the point that CO2 fertilization is a direct consequence of combusting obscene amounts of coal, oil and gas. Another direct consequence is global warming which causes droughts, destroys habitats, rises sea levels and threatens life, especially endangered animals and humans who live in poverty. The fact that CO2 is actually beneficial in some respects, like helping some plants grow faster or making historically cold habitats warmer, is losing track of the grander picture. CO2 fertilization most certainly does not offset global warming.

Moreover, the CO2 fertilization effect wears off in time. Also, the researchers note that CO2 is only one of the many effects that may cause the greening of the planet. These include climate change, nitrogen fertilization, and land management.

“While the detection of greening is based on measurements, the attribution to various drivers is based on models, and these models have known deficiencies. Future works will undoubtedly question and refine our results,” says coauthor Dr. Josep Canadell of the CSIRO Oceans and Atmosphere Division in Canberra, Australia and leader of the Global Carbon Project.