A study ten years in the making found that sea levels are rising at the fastest rate in the last 2,800 years. The researchers say that greenhouse gas emissions that build up in the atmosphere and heat the planet, melting glaciers and ice sheets, are to blame for this sharp rise.

A study ten years in the making found that sea levels are rising at the fastest rate in the last 2,800 years. The researchers say that greenhouse gas emissions that build up in the atmosphere and heat the planet, melting glaciers and ice sheets, are to blame for this sharp rise.

Three teams of international scientists were involved in the landmark research, which assessed the relationship between “temperature and global sea-level (GSL) variability over the Common Era through a statistical metaanalysis of proxy relative sea-level reconstructions and tide-gauge data.” The work suggests with a confidence greater than 95% that half or more than 5 inches of sea level rise detected in the 20th century can be attributed to man-made global warming.

“During the past millennia, sea level has never risen nearly as fast as during the last century,” said Stefan Rahmstorf, a physics professor at Potsdam University in Germany, one of 10 authors of the paper. “That was to be expected, since global warming inevitably leads to rising seas.”

There’s a natural variability in sea levels due to ocean cycles, volcanic eruptions and other factors. Nothing other than greenhouse gases spewed by man-made activities, however, could explain the rate of sea level rise from the past century, the sharpest over the 2,800-years time frame used for the study. “Ice simply melts faster when the temperatures get higher,” Dr. Rahmstorf told the New York Times. “That’s just basic physics.”

If current emission trends continue unabated, the researchers confirm that the sea level will rise by as much as four feet in 2100. This would make large areas in many coastal cities around the world uninhabitable in the lack of mitigation infrastructure like dykes. The last couple of decades, flooding tides has made life miserable for residents of  Miami Beach or Norfolk, Va. These sort of events will only become more common. According to Climate Central, which also produced this great interactive map, three quarters of the coastal floods recorded in the U.S. from 2005 to 2014 can be attributed to climate change. 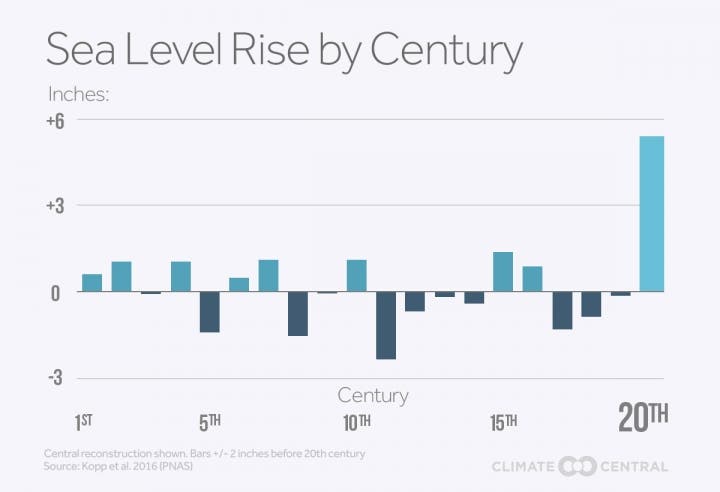 The historic Paris agreement signed by more than 190 countries last year pledged that the world will spare no effort to keep warming at no more than 2 degrees C past industrial age levels by 2100. The climate is already 1 C warmer, so this is a most ambitious goal. But even if the target is met, sea levels could rise by an additional 9 inches to 2 feet this century, the report concludes.