What a polar vortex is, and why it is affecting the US

by Mihai Andrei
in Climate, News, World Problems
Reading Time: 3 mins read
A A
Share on FacebookShare on TwitterSubmit to Reddit

A big part of the US and Canada is currently in the grip of a polar vortex – extreme colds, strong winds, cancelled flights and overall chaos in many parts of the continent – it’s big, and it’s nasty. But what is a polar vortex, and what’s causing it? 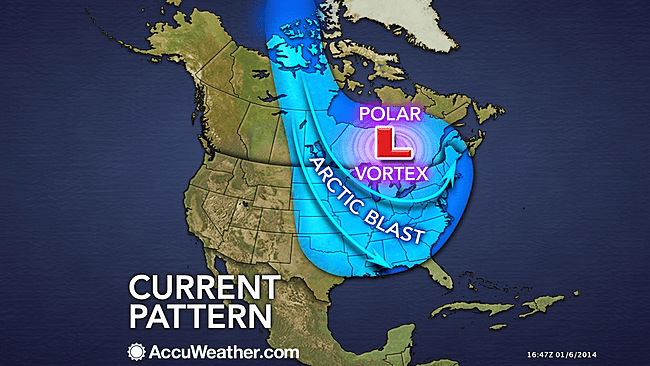 A polar vortex is a large scale cyclone, an area of closed, circular air motion rotating in the same direction as the Earth. It is basically a large pocket of very cold whirling air, typically the coldest air in the Northern hemisphere (in this case, it’s the coldest air to come to America in the past 20 years).

The vortex typically sits over the Arctic, keeping the cold air circulating in the polar regions. But sometimes, it breaks in two, and then, it can send the cold air much further south.

“This is why we’ve had such extreme cold,” Meteorologist Brett Anderson said. “The polar vortex moves around at times during the course of the winter, but rarely do you see it get pushed this far south,” Anderson said.

Along its way, the cyclone passed through Canada, where the high pressure and extensive snow cover allowed it to remain so frigid and reach the United States. Basically, all the conditions were just ‘right’ for this to happen, and go as far south as Nashville, Tennessee.

The weather is so cold that even the polar bears at the Chicago Zoo were brought inside as the weather dropped to a record low of -26 Celsius (-14 Fahrenheit). In Fargo, the largest city in North Dakota, temperatures sank below – 35C (-31 F). The weather conditions produced in the polar vortex could also make temperatures drop to the coldest on record in the 21st century.

Heavy snowfall occurred is also occurring in most parts affected by the vortex, and according to the National Weather Service, the Upper Midwest is covered in snow in a proportion of 98%. The Upper Great Lakes region is 100 percent snow-covered, and the Midwest is more than 76 percent covered.

So when will it end ?! When the strong air from the Eastern Pacific weakens and falls apart, the vortex will retreat and return to the North Pole. While it’s almost impossible to give an exact date, the critical state is expected to end in the next few days, if nothing significant changes.

I’ve seen some people (and even politicians) using the polar vortex as ‘proof’ that we are not facing global warming, but global cooling. This is fundamentally wrong, and if anything, the vortex was caused/amplified by global warming – as counterintuitive as that may sound. Here’s how:

Global warming causes a lot of ice to melt. The resulting water has a much darker color than the previous ice, and therefore, it absorbs much more solar energy, warming not only the sea water, but also the air above it (just like a black shirt captures more solar heat than a white one). As a result, the wind from the various air currents, disrupting the old arctic climatic winds, and enabling very cold air masses to escape the polar regions and move further south – towards Canada and the US. Also, because very cold air is significantly heavier, the run-off run-length is much larger than usual.

Yet another example of the global, unexpected, and devastating effects of climate change.