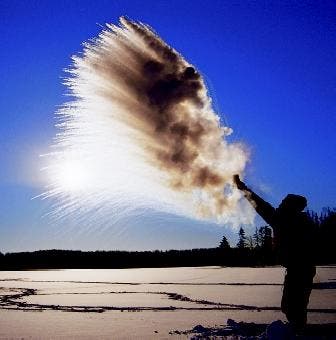 This week a big part of North America was paralyzed after powerful winds and freezing gusts swept the continent in the aftermath of the polar vortex. Well, that doesn’t mean you can’t have some fun. Apparently, throughout the Midwest people have tried to recreate a neat trick where your boil water and then quickly throw into the sub-freezing air, as shown on television, like the report a pair of TV meteorologists made in Lexington, Ky. Remarkably, the boiled water turns to ice before hitting the ground, all in a stardust like spectacle.

“All you have to do is bundle up, get some boiling water, and throw it out in the subzero temperatures and see what happens,” one broadcaster in North Dakota said.

“Threw a pot of boiling water in the air. Kids thought it was awesome,” Jason DeRusha, a WCCO-TV anchor in Minneapolis, tweeted to his followers on Sunday. “Do it, people.”

Well… a lot of people followed and they sure did it. For a couple of them, however, the whole thing didn’t turn out as expected. Over Monday and Tuesday, the Los Angeles Times counted at least 50 people on social media who reported burning themselves or their friends after trying to turn boiling water into snow. If all these people were solely responsible for their stupid actions, it wouldn’t have been such a big deal, but apparently children were also hurt. St. Louis Children’s Hospital in Missouri reported Tuesday afternoon that two kids received treatment for burning themselves trying the trick.

Here are a few proud twitter updates from people who tried the trick and got burned instead.

Kyle burned his arm trying to do the boiling water trick hahahah pic.twitter.com/FXjEsLOQCu

So I threw boiling water in the air, the wind was blowing and it landed on my head and back. I’m now in route to the ER w/ 3rd degree burns

So we tried to do one of those boiling water videos we have seen all day and we ended up at the ER lol #fail pic.twitter.com/F8AGP3moof

How the trick works

Some of you may wonder – how does it all work? Room temperature water is closer to zero degrees Celsius (freezing point of water) than hot water, but when you throw a cup of cold water outside the freezing cold it just lands in liquid droplets, without any spontaneous snow.  Here’s a great explanation.

“All things being equal, cold water freezes faster. [ZME Science: not entirely true. In some conditions hot water does indeed freeze faster than water, although the mechanisms aren’t entirely understood. This is called the Mpemba effect]

Some people claim that hot water freezes faster because a pot of boiling water can be thrown into the air on a cold winter day, and it freezes in mid air creating a shower of ice crystals. Whereas a pot of cold water thrown into the air comes down as large blobs of water. This happens because the hot water is so close to being steam, that the act of throwing it into the air causes it to break up into tiny droplets. (hot water is less viscous than cold water, listen to the sound it makes when you pour it in the sink) The small water droplets have a large surface area which allows for a great deal of evaporation, this removes heat quickly. And finally, the cooled droplets are so small, that they can be easily frozen by the winter air. All of this happens before the water hits the ground. Cold water is thicker and stickier, it doesn’t break up into such small pieces when thrown into the air, so it comes down in large blobs. ”
Joe Larsen, Ph.D. Chemistry, Rockwell Science Center, Los Angeles, CA

So, ZME readers, please don’t try this at home!