One energy expert from the U.K. made headlines with his bold comments. He says oil companies have only 10 years to adapt and make a shift away from fossil fuels -- their primary business, after all -- otherwise these will collapse. The market will not be forgiving.

With the price of crude under $45 and increasing public expectations to tackle climate change, the future of oil companies looks bleak. One energy expert from the U.K. made headlines with his bold comments. He says oil companies have only 10 years to adapt and make a shift away from fossil fuels — their primary business, after all — otherwise these will collapse. The market will not be forgiving.

This bombshell was dropped by Paul Stephens, a fellow at Chatham House thinktank, in a paper that investigates the future of major international oil companies (IOCs) like BP, Chevron, ExxonMobil, Shell and Total.

“The prognosis for the IOCs was already grim before governments became serious about climate change and the oil price collapsed,” Stephens wrote.

“The IOCs have been able to survive over the last quarter of a century, but signs that their business model is faltering have recently begun to show. As well as poor financial performances, the symptoms include growing shareholder disillusion with a business model rooted in assumptions of ever-growing oil demand, oil scarcity and the need to increase bookable reserves, all of which increasingly lack validity.”

That some of the strongest and wealthiest companies in the world might die in such a short while might sound ludicrous, but it’s really not that far fetched. In the wake of Exxon’s current investigation by NY’s attorney general for “lying about climate change”, many shareholders who own stock in oil are now calling for more transparency.

Oil companies list oil reserves as assets, but these could very well become stranded, literally buried in the ground, if governments call for a carbon tax and cut subsidies. Right now, fossil fuels are subsidized by $14.5 billion a day, but it’s foreseeable this winning streak might soon be over. Shareholders have another reason to be worried: ever-dwindling returns. In this respect, the graph below is telling. 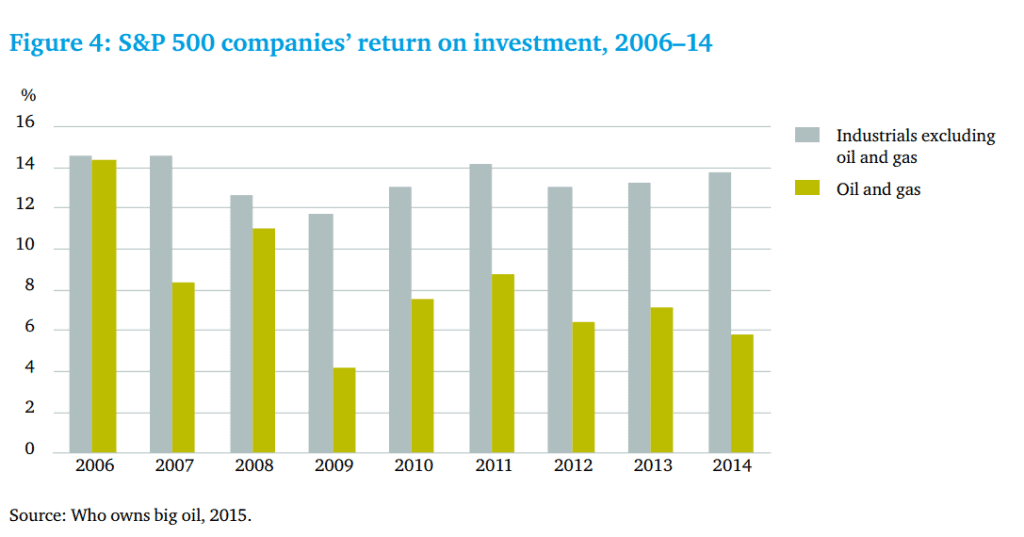 To survive, Stephens argues that the IOCs need a make a drastic shift in strategy. Some tips include:

However, even if all of the above are satisfied the IOCs are still in trouble. Historically, crude prices have spiked and plummeted in cycles but “the old cycle of lower prices followed by higher prices is no longer applicable”.

“Inevitably, this means that they must shrink into the remaining areas of operation, functionally and geographically, where they can earn an acceptable return. This would require a major change in the corporate culture of the IOCs. It remains to be seen whether their senior management could handle such a fundamental shift. If they can, the IOCs will be able to slip into a gentle decline but ultimately survive on a much smaller scale,” Stephens says.