Hurricane Sandy continues to ravage North America, going strong at 150 km/h winds, and is expected make landfall near the New Jersey-Delaware border Monday night, threatening the entire Eastern Seaboard, with numerous people already being evacuated or preparing for this dire event. Before discussing matters further, I’d just like to express my entire sympathy to all the people in danger or who have loved ones in danger – my best wishes go out to you! 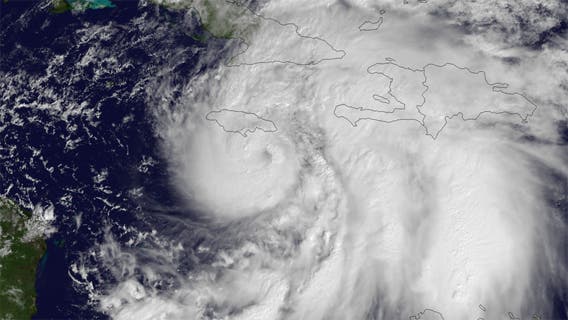 Just two weeks ago, Muncih Re, one of the biggest reinsurance firms in the world conducted a study of their own, called “Severe Weather in North America”. Don’t let the fact that this is a private organization fool you – reinsurance studies are extremely serious, well documented and thorough, because if they’re not, they lose money. What they concluded was bad news for Americans:

“Nowhere in the world is the rising number of natural catastrophes more evident than in North America.”, they wrote, related to “weather-related loss events”

Over the last three decades, this number has increased by a factor of 5, making North America the most prone area for this kind of disaster; while this growth can be attributed to a number of other factors, such as a rise in the number of people living in threatened areas, the main culprit is another old “friend”: global warming.

For the general public, this hurricane’s impact came as a shock; it’s late October, the hemisphere should be breezing towards a winter chill – so what is a super hurricane doing in the United States? This is a very valid question.

For climate researchers, the hurricane came not as a surprise, but rather a confirmation of dire theories.

“Folks, this storm is exactly the sort of thing climate scientists have been worried about for years,” wrote Amanda Staudt, a senior scientist with the National Wildlife Federation. “Global warming is putting hurricanes on steroids and we’re beginning to see the effects.”

So can you draw a line between human activity and hurricane activity? The answer is yes… and not. Rising sea levels, warmer waters and overall hotter temperatures all work together to amplify the damage hurricanes do and extend their season. However, a study conducted by World Meteorological Organization, published in Nature (paper here) came to some interesting conclusions. Here they are, summed up:

So how does this apply to Sandy? Well, there is almost a general consensus that it is, at least partially, fueled by waters with a warmer temperature; if it weren’t for those extra degrees, we would probably see a much smaller impact. But the thing is, hurricanes are complicated, and we still don’t understand them fully yet. There are a lot of factors that affect them, and the relationships between these elements are often hard to pinpoint, but it does seem pretty clear that global warming isn’t helping out.