by Mihai Andrei
in Climate, World Problems
Reading Time: 1 min read
A A
Share on FacebookShare on TwitterSubmit to Reddit

Yes, we’re living it. For the 330th consecutive month, it’s been hotter than the 20th century average. The National Climatic Data Center released some concerning data, to say the least. The globally-averaged land surface temperature for August 2012 was the second warmest August on record, at 0.9° Celsius above average, while ocean averaged ocean surface temperature was the fifth warmest on record, at 0.52° Celsius above average. 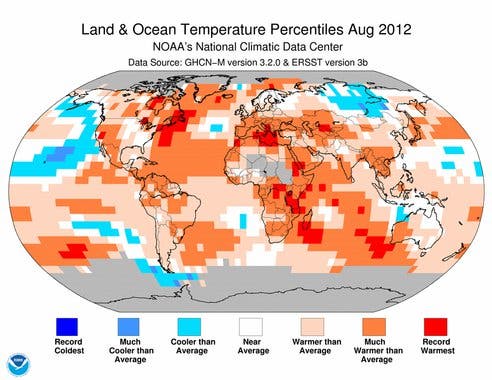 But the most worrying thing is that this is already a trend: it’s getting hotter and hotter. Second warmest, fifth, this no longer startles or alarms us – we’re already used to it; after all, for over 25 years, without exception, August has been hotter than the average. In over a quarter of a century, any given month has done the same, which seems to strongly indicate a connection between mankind and global warming: if the warming was a natural process, you’d expect to see all sort of variations, up and down, from the average, which obviously isn’t happening.