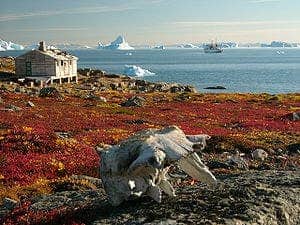 Typically, in the tundras, tree growth is hindered by very low temperatures, and usually, in the tundra, vegetation comprises of dwarf shrubs, sedges and grasses, lichens, etc. However, according to a recent study, plants and shrubs which colonized the Arctic tundra are starting to turn into small trees, a process which will accelerate global warming even more, if it occurs on a larger scale.

Scientists from Finland and Oxford University investigated an area of 100,000 square km, from Siberia to Finland; they found that in 8-15 percent of the area willow and alder plants have grown to over 2 metres in the last 30-40 years, something which is truly unexpected. Why? Because this kind of growth should have taken place over two centuries, or even more.

“It’s a big surprise that these plants are reacting in this way,” said Marc Macias-Fauria of Oxford University and lead author of the report. “But what we’ve found is that the shrubs that are already there are transforming into trees in just a few decades.”

Warming in the Arctic areas takes place about two times faster than in the rest of the world; as reflective ice and snow melt, they expose water or soil, which are significantly darker in color, and as a result, suck up more of the Sun’s heat. The problem here is that the same thing occurs if the trees grow big enough to rise over the snowfall.

While this study analyzed only a small fraction of the entire Arctic area, there is no reason to believe things are differently in other regions.