One step forward, two steps back.

This week, California Gov. Jerry Brown ended the state of emergency drought order signaling the horrendous four-year drought is now officially over. This was the driest four-year period in instrumental records which date back from 1895 and possibly the most severe in 1,200 years. Knowing this, it’s understandable why so many rejoiced at the news. However, while it’s true California isn’t as dry as four years ago, it’s not as wet as it used to be before the flood either. NOAA scientists say some of California’s hardest hit areas could need decades to recover from their current precipitation deficit.

The study reported in the Journal of Climate reconstructed precipitation levels in the area of California state since 1571. The analysis based on paleoclimate records suggests that the 2012-2015 period stands out as particularly extreme in the southern Central Valley and South Coast regions. “Some areas lost more than two years’ average moisture delivery during these four years,” the NOAA researchers wrote.

NOAA was able to estimate periods of dryness centuries ago despite the lack of official records using paleoclimatic proxies. For example, tree-ring and lake-sediment record the lack of water. This is how we know about “megadroughts”, periods of persistent drought which lasted for far longer than any drought we’ve recorded in the instrumental records.

According to Dr. Eugene R. Wahl, a NOAA paleoclimatologist and lead author the new paper, California will have to wait a long time before it can recover from the disastrous dry spell. The odds of the state completely recovering in the next two years is only 1 percent, Wahl says based on historical records. Part of why California managed to recover, at least in the northern half of the state, was due to extreme El Niño conditions between 2015 and 2016 but past dry events suggest that when a very strong El Niño followed a similar dryness, California took twice as long to recover.

At the same time, the state is currently receiving high amounts of precipitation for the wet season.

That’s a whole, on a state level, because dryness is experienced differently on a regional basis. The NOAA researchers studied California’s paleoclimate for seven standard climate divisions. The San Joaquin Drainage and the South Coast Drainage, which include the Los Angeles and San Diego metropolitan areas but also the agriculturally rich Central Valley, have never seen worse four-year drought since 1571. On the flipside, the Southeast Desert Basin had the highest chance of recovering within two years at around 4 percent. 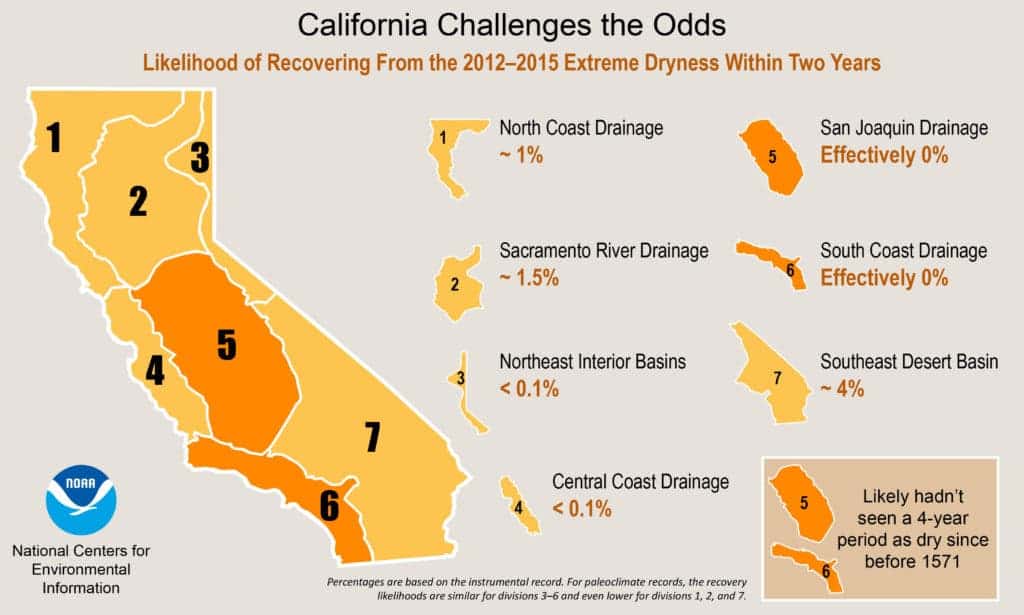 During his announcement, Gov. Brown blamed global warming for the drought, a claim that’s been echoed by scientists and environmental activists. One 2015 study found human emissions most likely intensified the drought in California by 15 to 20 percent. However, looking at precipitation patterns alone, NOAA researchers found these were capable of producing unprecedented dry conditions like those experienced between 2012-2015. What this means is that per business, as usual, the U.S. Southwest risks facing ‘megadroughts’.