They're resilient and they can make a recovery, if we just cut down on the palm oil.

The world’s largest orangutan species is quickly being vanquished by deforestation and hunting, a new study reports. 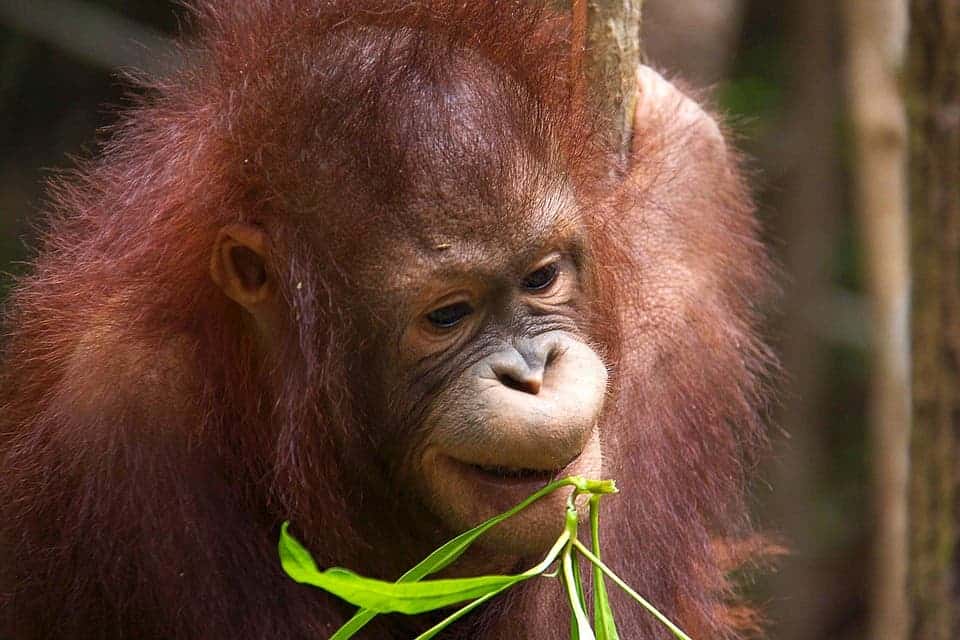 The Bornean orangutan is only found in Borneo, the third-largest island in the world. Split between Malaysia, Indonesia and Brunei, it’s a biodiversity hotspot, with a rainforest estimated to be around 140 million years old. There are about 15,000 species of flowering plants and 3,000 species of trees, as well as 420 species of resident birds and 221 species of terrestrial mammals. Among them is the critically endangered orangutan.

The orangutan is highly intelligent, displaying tool use and distinct cultural patterns in the wild. In recent decades, however, they’ve been threatened more and more by deforestation, mainly for the production of palm oil. But the new study suggests that it’s not just palm oil — hunting is also threatening these orangutans.

“The decline in population density was most severe in areas that were deforested or transformed for industrial agriculture, as orangutans struggle to live outside forest areas,” says Maria Voigt of the Max Planck Institute for Evolutionary Anthropology in Germany. “Worryingly, however, the largest number of orangutans were lost from areas that remained forested during the study period. This implies a large role of killing.” Orangutans are often hunted and sold as bushmeat.

Quantifying data on orangutans is not easy. In order to assess the population decline, Voigt and colleagues compiled years of field surveys, overlaying them on maps of estimated land-cover change over the same period. The monitoring of these changes was made possible by advancements in remote sensing technology.

It was a massive effort which involved researchers from 38 international institutions. In addition to the study, the data was also added to an interactive map which you can check out here.

“Our new study estimates that 76%, or 55.8 million hectares, of Borneo was old-growth rainforest in 1973. Old-growth forest ecosystems are intact and include many old (>500 years) closed-canopy evergreen trees.” the researchers write.

Most of the orangutan population has been destroyed. In total, researchers estimate that 148,500 Bornean orangutans have been lost in only 16 years, with only 70,000 to 100,000 animals left in the wild. To make matters even worse, 26 out of the 64 remaining populations have less than 100 individuals — the bare minimum for a population to be considered viable.

Yet not all is lost. Serge Wich from Liverpool John Moores University says that orangutans are much more resilient than anticipated. If we can leave them be, they can make a recovery.

“Orangutans are flexible and can survive to some extent in a mosaic of forests, plantations, and logged forest, but only when they are not killed,” Wich says. “So, in addition to protection of forests, we need to focus on addressing the underlying causes of orangutan killing. The latter requires public awareness and education, more effective law enforcement, and also more studies as to why people kill orangutans in the first place.”

The findings have been published in Current Biology.