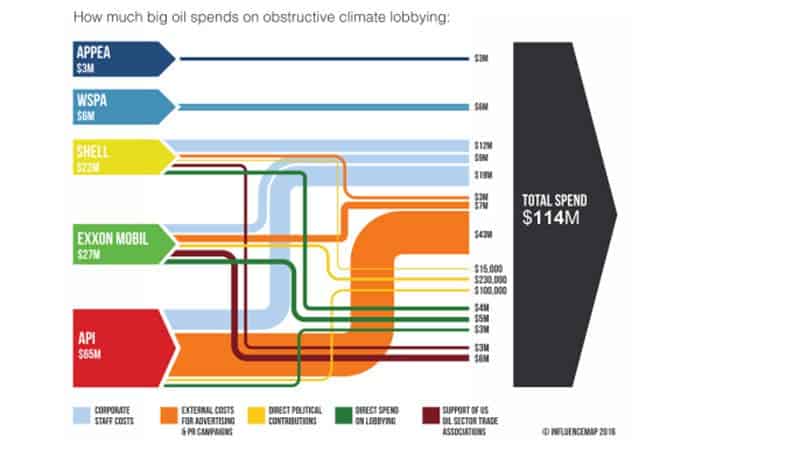 Despite the recent Paris agreement, the fossil fuel industry is still trying to prevent environmental progress and legislation. Influence Map, a NGU which analyzes how companies are influencing climate change policy wanted to see just how much oil giants invest in lobby to fight climate legislation. Their research suggests ExxonMobil spent $27m and Shell $22m to obstruct climate legislation.Two smaller trade groups, the Western States Petroleum Association (WSPA) and the Australian Petroleum Production and Exploration Association totaled about $9m. Lobby group the American Petroleum Institute spent the most at $65 million.

In case you’re surprised by that last figure, the American Petroleum Institute is one of the most well funded and consistently climate-obstructive lobbying forces in the United States, with a total budget in excess of $200m. Its leader, CEO Jack Gerard received a “salary” of over $14m in 2013, making him one of the world’s highest paid lobbyists… and highest paid people in the world. Of course, he dismissed  the Paris process as a “narrow political ideology”.

Oil companies aren’t operating the way they used to 10 years ago – they’re no longer denying climate change in the open (well, not always at least). Instead, they play a charade where they claim to accept global warming as a fact and express their desire to “green up”, while continuing to do the same things in the background. The manipulation tactic has become more subtle, but the bottom line is basically the same. Exxon knew about climate change since the 70s, but they hid it under the rug and invested huge sums into making people thing it isn’t real. The manipulation also works on the academic level, with 9 out of 10 top climate change deniers linked with ExxonMobil.

Investing money for lobbying against climate laws isn’t illegal. It’s likely that most companies in this industries do it, to some extent or the other. Extrapolating the figures to the entire industry, you end up somewhere around the $500 million every year (this is not an exact figure, just an approximate ballpark). These are extremely worrying figures, and one can’t help but wonder what other manipulation tactics are employed when it comes to that kind of money.