"There's no vaccine for stupid."

by Mihai Andrei
in Environment, News, Science
Reading Time: 3 mins read
A A
Share on FacebookShare on TwitterSubmit to Reddit

During Earth Day, on the 22nd of April, thousands of scientists marched in cities all across the world to protest against a political assault on facts and science.

It’s so absurd I don’t even know where to start. Basically, the anti-intellectual trend, fake news, and the “let’s not believe the experts” approach is what led Britain out of Europe and what got Trump elected. After Trump installed his cabinet and surrounded himself with billionaires serving as advisers, it got even worse. The EPA was censored, climate change denial became the norm, and real facts were replaced by what the White House prefers to call “alternative facts” — basically, bullshit.

It was the first March for Science, of likely many to come. A movement not catalyzed against a specific person or group of people, but rather against a way of thinking — a backward, non-scientific, and potentially very harmful way of thinking. Obviously, this was the core of the moment and it’s a much-needed reaction; scientists need to make their voices heard, now more than ever.

But what I really liked about this march is that for a day, all lab coats and studies were thrown out the window, replaced with witty signs that really make you think and are often funny and insightful. After all, we’ve all seen that being right is sometimes just not enough, you have to be right the right way, and a bit of wit always helps.

While the main movement was in Washington, similar marches took place all around the world, in what has been described as ‘pretty unprecedented.’

“The march is pretty unprecedented in terms of the scale and breadth of the scientific community that’s involved, and it does recall Physicians for Social Responsibility and various scientific groups against nuclear war in the Reagan era, that’s I think the most recent precedent,” said Robert Proctor, a professor of the history of science at Stanford University. “But this is even broader in the sense that there’s a broader perception of a massive attack on sacred notions of truth that are sacred to the scientific community.”

Here's a puppo participating in the #ScienceMarch. Cleverly disguising her own doggo agenda. 13/10 would keep the planet habitable for pic.twitter.com/cMhq16isel

Oh and by the way, in case you’re still wondering how we know scientists are right… just look around you. Everything kinda works, doesn’t it? I mean, the planes flying between countries and continents, everyone’s got uber smart computers and phones, medicine has advanced incredibly… we trust in all those things, right? That’s basically our life. So why not give credit where credit is due?

The burns were also real:

#BlindedByScience #marchforscience #EarthDay Big round of applause to everyone who turned out all around the Globe for this important day! pic.twitter.com/JK9lFNxuD7

I’ll leave you off with one last quote, and if you’ve made it this far, please spend a few more seconds and think about this next sign. “Facts do not cease to exist because they are ignored.” It doesn’t matter whether some people choose to ignore climate change, it’s still happening. A vaccine doesn’t care if you believe in it or not, it just works. Oh and most importantly, when thousands of brilliant people dedicate years and decades of their lives towards understanding something… don’t think you know better just because some shmuck says otherwise. Even if that schmuck happens to be the president of an important country. Thank you, men and women of science — thank you and good luck*! 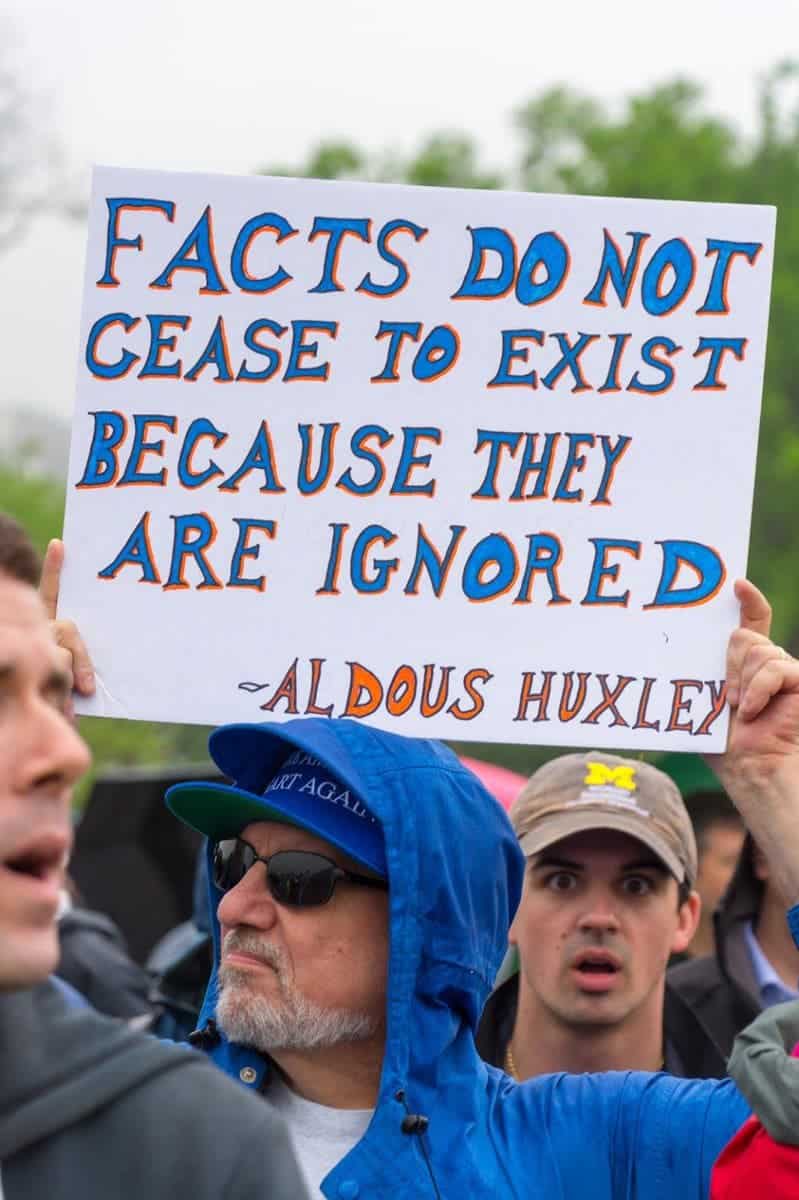 *By good luck I mean may the countless unforeseeable coincidences that influence your lives affect you in a way that you consider positive.