To box jellyfish carries enough venom to kill 60 people. Until now, there was no way to neutralize its deadly sting.

The Australian box jellyfish (Chironex fleckeri) can carry enough venom to kill 60 people — that’s more venom than any other animal on Earth. When it doesn’t kill, the jellyfish’s sting is known to cause excruciating pain. The worst part about this jellyfish’s sting is that there is no way to neutralize it once it happens — but this may soon change. Using gene editing technology, Australian researchers at the University of Sydney identified the mechanism by which the sea creature’s venom destroys human cells and found drugs that seem to at least partially block this ability.

In order to find out how the box jellyfish venom acts upon the human body, the researchers painstakingly used CRISPR gene editing to knock out a different human gene from millions of individual human cells. One by one, the researchers went through each cell looking for those that survived the venom.

“It’s the first molecular dissection of how this type of venom works, and possibly how any venom works,” the study’s lead author Raymond Lau said in a statement.

The findings suggest that the venom targets the human skin where it interacts with cholesterol. When the researchers administered a drug (cyclodextrins) that eliminates cholesterol and is already approved on the market, they found that it can also work as an antidote as long as it was administered 15 minutes after a sting. The drug was tested on human cells in a lab dish and on live mice. By blocking the venom’s ability to interact with cholesterol, some of the pain should also be blocked.

“By putting the evidence together, we worked out which genes the box jellyfish venom needs to target in order to kill human cells in the lab. One we identified is a calcium transporter molecule called ATP2B1, and is present on the surface of cells,” Greg Neely, one of the authors of the new study, wrote for The Conversation. 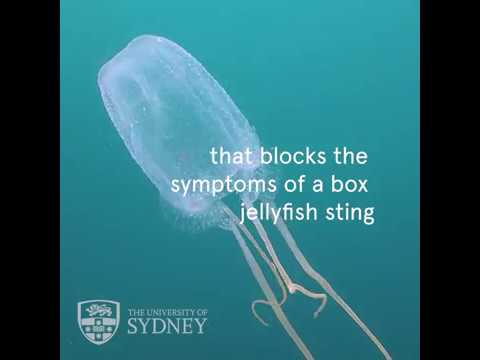 The researchers say that they don’t know yet if the drug they identified can stop a heart attack — this is a question which they hope to answer in an upcoming new study.

What’s particularly interesting, however, is that the same method can be used to study other types of venom for which there currently isn’t an antidote. This was only the first time that CRISPR was used to find an antivenom and it certainly won’t be the last.