by Elena Motivans
in Animals
Reading Time: 4 mins read
A A
Share on FacebookShare on TwitterSubmit to Reddit

When you go on vacation to the seaside, you are likely to see some prickly sea urchins, especially on rocks. Though you may be busy trying not to step on them, if you look a bit closer, you can see that they may be sitting in a hollow space in the rock. The hole might even look like the perfect size for the urchin. Although people have been noticing this for at least a hundred years, there has never been any hard proof that the urchins actually bore into rocky reefs. Researchers from Villanova University in the USA tested sea urchins with a variety of different stone to prove that the sea urchins do make hole in stone, and for one very particular reason.

The researchers tested purple sea urchins (Strongylocentrotus purpuratus) on four different types of rocks— fine and medium grain sandstones, one mudstone, and granite— for a whole year. The urchins started to create depressions in every rock type, though at different rates. A pit would be formed in medium grain sandstone in less than five years, while it would take more than a hundred years to form a pit in granite. The shapes of the pits were also different— they were deeper in sedimentary stone and shallow and flatter in granite. 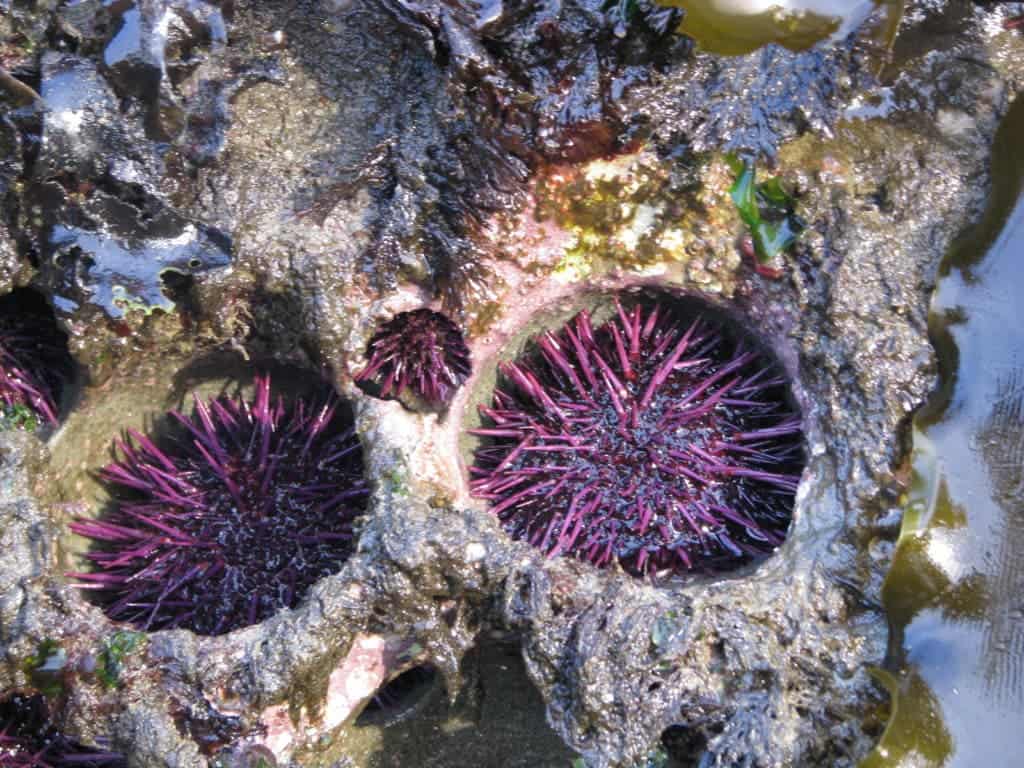 Each urchin excavated about 32 grams of medium grain sandstone in a year. Because there are many sea urchins, large amounts of rocks can be converted to sediments over a relatively short period of time. Combining these bioerosion rates, determined in the lab, with actual urchin densities, the researchers estimated that urchins could produce up to 200 tonnes of sediment per hectare per year on medium grain sandstone reefs. Rates have not been tested in the field yet, and could differ from laboratory rates. The reason for the bioerosion was determined in a second, shorter experiment. The sea urchins ingest the substrate as food.

“[The sea urchins] have a fascinating structure called Aristotle’s Lantern which is comprised of muscle, connective tissue, and articulating skeletal elements.  There are five teeth, everything comes in fives in sea urchins, that are the “business end” of the lantern. When these teeth are not chewing on algae that they capture with their spines and tubefeet, they are rasping and scraping the surface rocks that the urchin is attached to by the tube feet. I believe it is this constant rasping and scraping of the teeth that result in the excavation of the rock,” explained Michael Russell from Villanova University, first author of the study, to ZME Science.

In the North Pacific, sea otters (Enhyrdra lutris) prey on urchins. Otters play an important role in the ecosystem: by controlling the number of urchins, the otters are also indirectly controlling the amount of bioerosion that occurs. So if there are more otters, then the area would be more rocky, with more kelp. When there are fewer otters, urchin populations spike, they wipe out a lot of the kelp, and create urchin barrens. Since there is not much kelp to eat, the urchins would likely bioerode at higher rates. Sea otters were hunted for their fur in the 18th and 19th century, and due to a conservation effort, did recover, though some populations are still in trouble. Therefore, it is still classified as an endangered species. Since there are fewer sea otters, there are more sea urchins.

“If a sea urchin has macroalgae, [such as] kelp to munch on, it pretty much just focuses on consuming that and the teeth are busy masticating the kelp. When it does not have macroalgae to eat, they just rasp the substrate.  So our hypothesis is that areas with lots of drift kelp would tend to have less bioerosion and areas like urchin barrens would have much more,” postulated Russell.

Rocky reefs are non-living, unlike coral reefs, so the urchins actually do not harm them. The pits are very important for the sea urchin itself, for its behaviour, growth, shape, and protection from predators and heavy waves. Additionally, the pits create microhabitats that host a variety of different organisms. Although an urchin barren sounds bleak, it could be teeming with life. It will take more research about bioerosion to tease out its exact effect on the ecosystem.