Praying mantises hunt birds all over the world

Luckily, it's not so common.

by Elena Motivans
in Animals, Biology, News
A A

Praying mantises are predators with powerful front legs that usually eat insects and spiders alive. They have been known to occasionally eat small frogs or reptiles. There have been videos on YouTube and accounts of praying mantises eating killing and eating small birds, but no one knew how common it was. The zoologist Martin Nyffeler from the University of Basel found as many accounts of praying mantises eating birds as possible. There were 147 documented cases in total that were published accounts or found on social media. 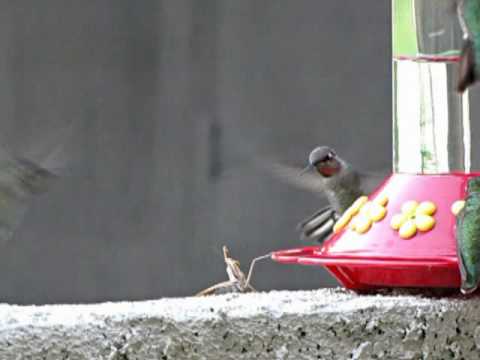 One video of a praying mantis attacking a hummingbird. Image credits: hbladyvta.

When a bird comes close, the mantis strikes with its two raptorial front legs. The mantis holds the bird and starts feeding. Mantises like to hang out by hummingbird feeders because the sugar water attracts its prey, like bees or flies. When the mantis is hungrier it might be more likely to target a larger prey. The mantises that eat birds are large, at least 6 cm (15 inches) usually, and could actually weight more than some birds. For example, hummingbirds only weight 3-6 g (0.1-0.2 ounces) so it isn’t so crazy that a mantis could take on one of them. The mantises tend to target the head and brains of the birds that they capture and kill them within a minute or so.

This behavior was found in 13 different countries, on every continent besides Antarctica. The victim birds come from 24 different species and 14 families. Most of the records were from the USA where praying mantises often capture hummingbirds at feeders or garden flowers. The most common victim was the Ruby-throated Hummingbird (Archilochus colubris), and other hummingbird species were also common. However, this could be because many people have hummingbird feeders with sugar water and therefore can observe this behaviour and record it. North America also has some of the world’s smallest birds.

Additionally, in the 1900s, several species of non-native large mantises were released to control pests. However, these mantises are now among those that feed on small birds. However, both native and invasive mantises do prey on the birds. Because of these findings, it’s not the best to use preying mantises (especially non-native ones) for pest control because they could have other effects, like killing small birds.