Scientists find surprising species of jellyfish near the Mariana Trench

This mesmerizing jellyfish almost looks photoshopped - but it's as real as it gets.

This mesmerizing jellyfish almost looks photoshopped – but it’s as real as it gets. NOAA researchers have discovered it during the Okeanos Explorer mission near the Mariana Trench, 2.3 miles (3.7 km), containing mesmerizing reflective bulbs in its body.

Scientists believe this animal belongs to the genus Crossota, a group of jellies widespread throughout the oceans. Unlike many other species, they don’t have a sessile stage, but simply float around the waters like plankton.

The creature is likely a predator, judging by its posture in the first part of the video below: its bell is motionless, while its tentacles are spread out like the struts of a spider’s web, waiting for something to stumble onto them. 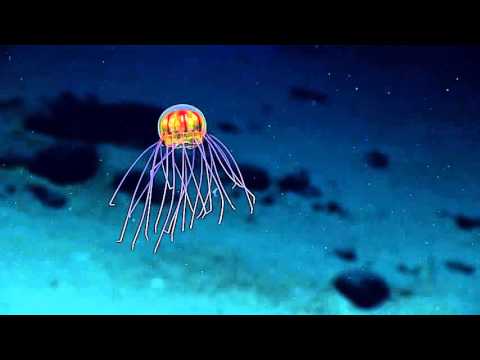 Initially, it was thought that the bright yellow things (likely gonads) were bioluminescent, but at a better look, it just seems like they are very reflective.

Okeanos Explorer and Deep Discoverer will be probing the Marianas Trench Marine National Monument and the Commonwealth of the Northern Mariana Islands over the next nine or so weeks, looking for the very rare and special environments and species hosted in the area. This isn’t the first weird species they found around. Just in the past couple of weeks, they’ve found what seems to be a new species of bizarre harp sponge and a crazy-looking dumbo octopus, who just went flying by. They also found field of small, sedimented balls – likely the mysterious (and appropriately named) giant testate amoeba – Gromia sphaerica. It’s a wonderful testament to the diversity of the life that’s just teeming beneath the waters.

You can check out the live feed of their explorations here, and a log of daily highlights and associated videos here. You can also watch live-feed of the exploration here, but remember that their timezone is likely very different from yours. Most ROV dives will begin around 4:30 pm Eastern Time and finish around 12:30 am the next day – a great watch for night owls or for those not in the mood for a movie.