More evidence adds up to support the intelligence of elephants

Researchers have shown that Asian elephants are even smarter than we thought.

Researchers have shown that Asian elephants are even smarter than we thought. They exhibited bodily self-awareness and use it in real-life problem solving.

Self-awareness in both children and animals is regarded as a clear sign of intelligence, but it’s not exactly the easiest thing in the world to demonstrate. The classic study involves the subject looking at a reflection of itself in a mirror, and seeing whether or not it understands it is looking at itself. So far, only a handful of species has passed this test — great apes, dolphins, magpies and elephants. But more and more researchers argue that the mirror test is an imperfect and incomplete measure of one’s self-awareness. Self-awareness is not a simple black-or-white measure, it is a string of complex thoughts and understanding, and the mirror just doesn’t cover that.

So scientists started looking for alternative tests to complement the mirror, and one of the main candidates is a custom self-awareness test. This test looks at how individuals may recognize their bodies as obstacles to succeed in a problem-solving task. The idea is to analyze the individual’s understanding of the way his body interacts with the surrounding environment, and then see how the individual uses this to solve problems. 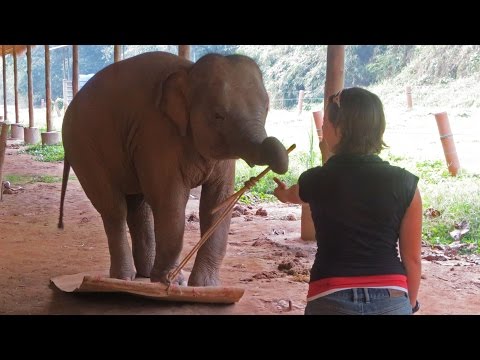 For the elephant version of this test, Dr Josh Plotnik, visiting researcher at the University of Cambridge and founder of conservation charity Think Elephants International, devised a new test. Working together with his colleague Rachel Dale (now a PhD student at the University of Veterinary Medicine in Vienna), he attached a stick to a mat using a rope. The elephants had to walk onto the mat, pick up the stick and pass it to a trainer. As you can imagine, the trick was that the stick was connected to the mat, and with the elephant standing on the mat, it couldn’t pass it — it had to get off the mat for this to work. The elephants had to realize they need to get off the mat before they could pass the stick. They also had a control version of this test, in which the stick wasn’t tied to the mat.

“This is a deceptively simple test, but its implications are quite profound,” says Dr Plotnik. “The elephants understood that their bodies were getting in the way, so they stepped aside to enable themselves to complete the task. In a similar test, this is something that young children are unable to understand until they are about two years old.

“This implies that elephants may be capable of recognising themselves as separate from objects or their environment. This means that they may have a level of self-understanding, coupled with their passing of the mirror test, which is quite rare in the animal kingdom.”

Furthermore, this solidifies the status of elephants as intelligent creatures. Plotnik argues that studies such as this are important to help us understand how intelligent other animals are, and increase our appreciation of them. In 2011, he conducted a different study showing that elephants often work together to solve problems. His research is a solid indication that we may have been underselling elephant intelligence for years.

“Elephants are well regarded as one of the most intelligent animals on the planet, but we still need more empirical, scientific evidence to support this belief,” says Dale. “We know, for example, that they are capable of thoughtful cooperation and empathy, and are able to recognise themselves in a mirror. These abilities are highly unusual in animals and very rare indeed in non-primates. We wanted to see if they also show ‘body-awareness’.”