International treaties to protect the elephants are not working – that’s the sad truth. There is no real, practical way of enforcing them, and as a result, whatever few elephants are left are still being tracked down and hunted, mostly for their tusks. Researchers estimate that tens of thousands of African elephants are now being killed by poachers each year, from a total wild population of around 400,000.

“It doesn’t take much math to show we have a serious, urgent problem,” says Samuel Wasser, director of the Center for Conservation Biology at the University of Washington in Seattle.

It’s estimated that a total of 39 tons (!) of illegal ivory were traded worldwide in 2011, with the number constantly growing or at the very best, remaining the same. We have every reason to believe that the number for 2012 will be even bigger than that. Poachers get about US$1,600 per kilogram in the Far East, but that number may very well be higher in other parts of the world. Many measures, plans and etc have been adopted, but so far, there’s been little to no improvement.

“We’re really at a tipping point, I think,” says George Wittemyer, an ecologist at Colorado State University in Fort Collins, who studies elephants in the Samburu National Reserve in Kenya. “We’re seeing declines in the species as a whole and we’re seeing poaching spread into what were once untouchable safe havens.”

Indeed, it’s That is the stark message that Wasser and others will deliver to policy-makers in Bangkok next week, at the triennial conference of the parties to the Convention on International Trade in Endangered Species of Wild Fauna and Flora (CITES). The thing is, it’s almost impossible to get some accurate estimates – because of the sheer size of the elephant territory and the rough conditions there. 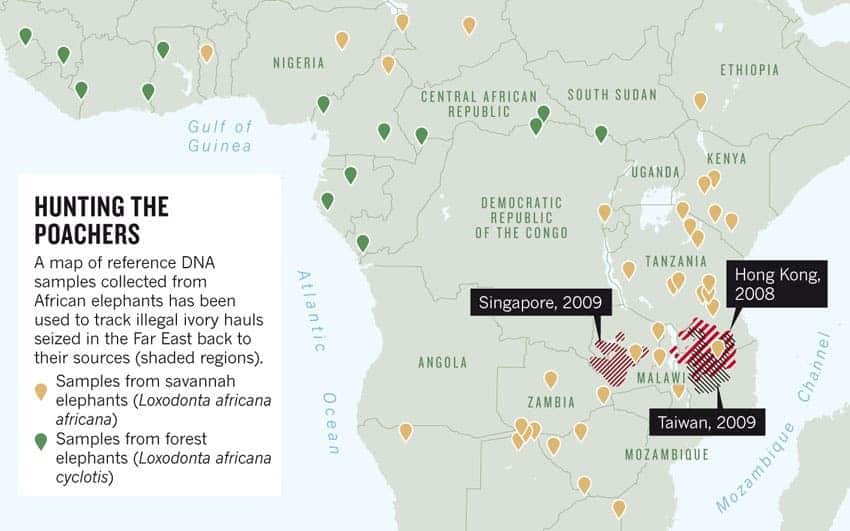 So Wasser and his team has developed a map of DNA samples collected across Africa which he plans to use to pinpoint the origin of the ivory, giving a more accurate depiction of where the ivory is coming from. He wants CITES to increase forensic scrutiny of the huge stockpiles of ivory in many African nations, so authorities can know where most of the ivory is coming from and increase efforts in those areas.

“There are probably not as many of these poaching hotspots as people might think.”

Meanwhile, others are working on the matter as well. Alfred Roca, a geneticist at the University of Illinois at Urbana-Champaign (who demonstrated that in fact, African elephants are two different species) has used mitochondrial DNA to trace ivory hauls – he believes that this could very well complement Wasser’s work.

“It’s very important to source these large-scale ivory seizures. It should be mandated through CITES that there is forensic examination of the shipments so the source can be determined,” says Tom Milliken, the elephant expert at wildlife-trade monitoring group TRAFFIC, which is headquartered in Cambridge, UK. Milliken will be presenting the ETIS data at the Bangkok meeting.

However, nothing is going to work in terms of elephant protection until sanctions aren’t applied to countries illegally exporting ivory.

“We have reached a moment when the threat of sanctions is certainly warranted,” says Milliken.