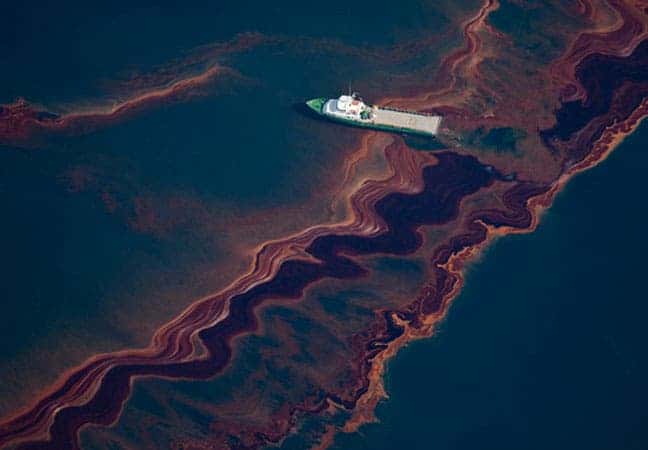 Last December, scientists showed that dolphins in Louisiana were suffering from abnormal lung diseases and low birthrates in the wake of the BP Deepwater Horizon oil spill that released more than 636 million liters of crude oil into the Gulf of Mexico in 2010. Now, another study illustrates that potentially lethal heart defects in two species of tuna and one species of amberjack are also caused by the oil spill. This comes only a week after BP was given permission to explore the Gulf of Mexico for oil again.

Just four years after the Deepwater Horizon oil spill, BP gets permission to go at it again. Almost 4 years ago, a geyser of seawater erupted from the marine riser onto the rig, shooting 240 ft (73 m) into the air. This caused an explosion which destroyed the ship, which ad 126 crew on board (7 of which were BP employees), killing eleven and virtually injuring everybody. After burning for approximately 36 hours, Deepwater Horizon sank on 22 April 2010.

So far, BP has agreed to pay $2.4 billion in fines, but they face additional penalties that could range from $5 billion to $20 billion. However, while this may sound like a huge sum, it’s not really that big, when you consider their profits. BP announced record profits, with $4.13 billion only in the first 3 months of this year. So basically, they’ve been fined their profits for 40 days… doesn’t really seem like that much, does it?

In order to conduct their study, researchers recreated the the oceanic environment that yellowfin amberjack, yellowfin tuna and bluefin tuna larvae would have encountered in 2010 in the lab. They introduced the larvae to Deepwater Horizon oil samples at environmental conditions that matched those of the spill. Just like mammals, fish are extremely vulnerable to negative effects during their early development stages.

“They can’t swim as fast, so they are either going to get eaten or they won’t be able to eat enough,” John Incardona, research toxicologist at the National Oceanic and Atmospheric Administration and co-author of the study told ZME Science. “That leads to reduced survival.”

The scientific community approved with the methods and the results used. Peter Hodson, a fish toxicologist at Queen’s University in Canada praised the fact that researchers kept the larvae alive long enough to study the effects of the oil, saying that it is a “tour de force”. Steve Murawski, a marine ecologist at the University of South Florida who also did not participate in the study said that the experiment created “as near realistic conditions as possible.”

Basically, not a scientific voice was raised against this study – if anything, biologists have been praising it. However, a BP spokesperson, Jason Ryan, contacted The Verge claiming that:

“The paper provides no evidence to suggest a population-level impact on tuna, amberjack, or other pelagic fish species in the Gulf of Mexico,” as the “oil concentrations used in the lab experiments were rarely seen in the Gulf during or after the Deepwater Horizon accident.”