The giant armadillo, Priodontes maximus by its scientific name, or the tatou, as it is colloqually called was once found widely throughout the tropical forests of eastern South America, but now, thanks to deforestation and human city expansion, it faces extinction. It’s quite a rare sight to see one, but with patience and knowledge, Brazilian researchers managed to take the first baby portrait of the rare and reclusive giant armadillo. The 4-week-old armadillo is seen following its mother to a new burrow in Brazil’s Pantanal, one of the world’s largest tropical wetlands. 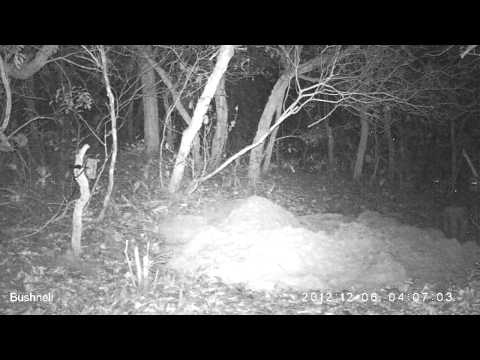 “It took 3 years of hard work to get these images,” says Arnaud Desbiez, coordinator of the Pantanal Giant Armadillo Project, which tracks the largely nocturnal threatened species, each of which can weigh up to 50 kilograms.

Researchers don’t really know much about the armadillo’s sex life, but this along with other recent discoveries seem to suggest that they only raise one offspring at a time.

“This illustrates the importance of long-term studies and a dedicated hard working team in order to gather the necessary information to conserve this rare species,” says Desbiez.