62 year old albastross, tracked since 1956 by USGS, gives birth to a healthy chick

Her name is Wisdom, and she’s absolutely awesome! She’s the world’s oldest known living wild bird, at 62, and she produced a healthy living chick, surprising the entire world. 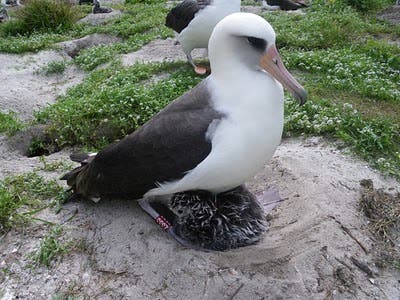 It’s remarkable enough that she reached this age, with the lifespan for the typical albatross being somewhere between 30 and 40 years, but giving birth, and to a healthy offspring… that’s simply more than anyone would have expected – that’s about as stunning as a woman giving birth over 100 years old.

Biologists had previously thought that like other birds, albatross females became infertile late in life and carried on without producing chicks. But Wisdom just defies the traditional beliefs, prompting scientists to chuck some of their early theories about the bird out the door. Also, this is not a singulary outstanding event.

Wisdom has raised chicks five times since 2006, and at least 35 in her entire lifetime. Since she was first tagged by the United States Geological Survey in 1956, she has flown a distance of 3 million miles (almost 5 million km). Just so you can get an idea on what that actually means – it’s 6 times to the Moon and back, the USGS explained.

“It blows us away that this is a 62-year-old bird and she keeps laying eggs and raising chicks,” said Bruce Peterjohn, chief of the Bird Banding Laboratory at the USGS Patuxent Wildlife Research Center in Laurel. “We know that birds will eventually stop reproducing, when they’re too old to breed anymore,” he said. “The assumption about albatross is it will happen to them, too. But we don’t know where that line is. That in and of itself is pretty amazing.”

Wisdom’s longevity and fertility could not only help us rethink what we know about the albastross, but also our entire knowledge on oceanic ecosystems.

The main problem in this type of research is the somewhat unreliable nature of the data – basically, what happens is that after some 20 years, the tags fall off, sometimes before being replaced. Wisdom went through six, which were thankfully replaced before she lost them.

As far as Peterjohn and other scientists know, “half the birds could be 60 years old,” he said.

“These birds could be much older than we think.”

Another interesting fact is that albatrosses mate for life suggesting that Wisdom probably had to find a new, younger mate once or twice in her life

Sadly, 19 out of 21 species of albatross are severely threatened with extinction – the likely cause being humans. Fishermen throw bait in the ocean to lure fish, but they also lure albatross that get hooked down and drown. The birds also swallow oceanic garbage and debris – it’s estimated that five tons of plastic are unknowingly fed to albatross chicks each year by their parents, the USGS said. Overfishing is another issue leaving these birds struggling.