by Mihai Andrei
in Animals, Biology, Environment
Reading Time: 3 mins read
A A
Share on FacebookShare on TwitterSubmit to Reddit

The more researchers study ecosystems, the more we learn that an ecosystem behaves, in many ways, just like a living organism: thousands of years after human hunters wiped out big land animals like giant ground sloths, the ecosystems they lived in are still suffering from the effects, much like a body suffers from past trauma.

Humans wiping out species (directly through hunting or indirectly through habitat destruction) is not really a new thing. Early human hunters have posed a stress on environments for thousands if not tens of thousands of years, because they were so successful and the prey didn’t have enough time to adapt.

Most ecosystems rely on big animals to supply them with nutrients (read: dung fertilizing).

“If you remove the big animals from an ecosystem, you pretty much stop nutrients moving,” says Chris Doughty of the University of Oxford.

In order to understand the impact of this extinction, Doughty and his colleagues studied the distribution of phosphorous – a nutrient that plants need to grow; he analyzed the Amazon basin in South America, an area which was once the home of fantastically large animals, such as elephant-like gomphotheres and giant ground sloths.

Unfortunately for these spectacular animals though, some 12.500 years ago, humans moved to South America, and shortly after this, these animals went extinct due to extensive hunting and climate change. Today, the Amazon basin is home to a huge biodiversity, but there are no more truly big animals – and their extinction still has a massive effect on the distribution of phosphorous throughout the basin.

Using the relationship between animal size and phosphorous distribution, Doughty estimated how much phosphorus South America’s larger extinct animals would have transported 15,000 years ago. His model concluded that megafauna would have spread nutrients 50 times faster than today’s fauna. This happens because big animals carry more food around in their bellies and they also travel more searching for food. It’s just like blood vessels in the body:

When you get rid of big animals, it’s like severing the nutrient arteries.”, says Doughty. He thinks the same thing happened in North America, Europe and Australia, where most big animals have also been wiped out. “The idea that herbivores redistribute nutrients is not new, but the scale of this thinking is much, much bigger,” says Tim Baker at the University of Leeds in the UK.

If his model is correct, than it’s quite safe to assume that the Amazon is still recovering from this drastic event which severely altered the circuit of nutrients. With large herbivores gone from the area, it’s up to the humans to take their role – but we’re doing the complete opposite of what they’re doing. 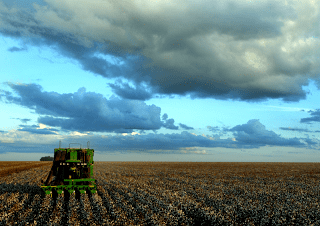 “These megafauna would disperse nutrients, whereas humans concentrate them,” says Doughty. We spread fertiliser on small plots of productive farmland, and keep large animals like cows fenced rather than letting them roam freely. “There are probably more nutrients because of people, but they are very poorly distributed.”