Japanese researchers have demonstrated an innovative refrigerator that employs a thermoacoustic engine to cool things down to a minimum temperature of -107.4 C. This sort of heat engines based on sound waves have been researched since the 1990s for generating clean energy but it’s only recently that they’re proving to be efficient. The ‘sound wave refrigerator’, for instance, works on waste heat alone which can be as low as 270 degrees C.

A thermoacoustic (TA) engine‘s operating principle is centered around the heating, cooling, and oscillation of gases enclosed in dedicated cavities. Typically, helium is used. 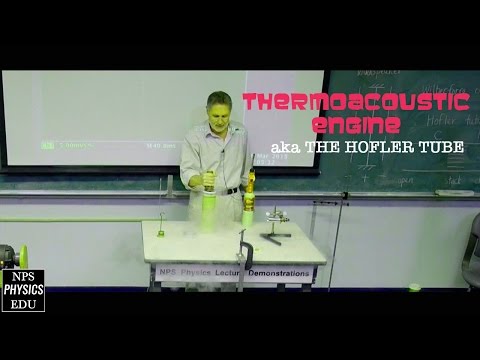 Your everyday Stirling engine works by shifting cool air to a hot heat exchanger. As the air is heated, it expands driving some kind of machinery. This hot air then comes in contact with a cold heat exchanger, contracting and yet again turning the piston, for instance. The TA engine is a variation of the Stirling engine with some key distinctions. For one, the TA doesn’t use moving parts at all. Instead, gas is pushed around by momentum in the form of sound waves.

A normal refrigerator, on the other hand, has loads of moving parts which limit its efficiency. To keep your food optimally cold, a refrigerator first pumps a refrigerant from outside the unit into a compressor. The high pressure generates a lot of heat which is lost to the ambient air and, as a result, the gas condenses into a liquid. The liquid, which still under a lot of pressure, is then passed through a series of valves that moves the agent from high pressure to low pressure. Yet again the refrigerant undergoes a phase change, this time from liquid to gas. The gas expands rapidly — this is very cold gas now, which is pushed up into metal coils inside of the fridge.

Thermoacoustic compressors, however, dispense with many of these mechanical parts. Instead of mechanical compressors,  loud sound waves at resonant frequencies can just as well generate compression of the gas. The process is theoretically more efficient, and refrigerations would no longer require special refrigerants which are damaging to the environment and human health like the chlorofluorocarbons or ammonia.

Though the technology is thought to be very promising, several limitations have kept consumers away. One of the main problems is that previous designs required operating temperatures in excess of 500 degrees Celsius. The designs couldn’t be scaled very well for most applications like heavy industrieseither.

The new engine designed by Shinya Hasegawa and colleagues at Tokai University, however, operates at less than 300 degrees Celsius which is the temperature of more than 80% of industrial waste heat. At this source heat, the TA engine could produce gas oscillations at 85 degrees, lower than the boiling point of water.

“TA engines do not have moving parts, are easy to maintain, potentially high efficiency, and low cost,” says Hasegawa, an associate professor at the Department of Prime Mover Engineering, Tokai University, Hiratsuka, Japan.

The TA’s configuration consists of three etched stainless steel mesh regenerators  fixed in optimal positions. The diameters of the regenerators ranged from 0.2 to 0.3 mm. Heat exchangers made of parallel copper plates were used.  The secret to the new refrigerator’s performances lies in how these regenerators and heat exchangers were positioned. By finding that ‘sweet spot’, the Japanese researchers were able to provide more cooling power with less heat input, as reported in Applied Thermal Engineering and the Journal of Applied Physics.

Now, the team is concentrating on adapting the design so it fits industrial applications. There are many industrial consumers who could significantly increase their energy efficiency, and thus cut on greenhouse gas emissions, by turning some of their waste heat into useful energy. A miniature version could, for instance, fit in your automobile where it can power the air conditioning.