What Neil Armstrong and Buzz Aldrin left behind

by Mihai Andrei
in Remote sensing, Space, Space flight
Reading Time: 2 mins read
A A
Share on FacebookShare on TwitterSubmit to Reddit

Perhaps the most famous thing left behind on the Moon is a footprint, a boot-shaped impression in the moon dust, photographed and viewed by millions of people. If everything goes according to plan, in the future, many people visiting the Moon will look at it and refer to it as ‘the first’. But about 100 feet away, in the Sea of Tranquility, Armstrong left something more important, forgotten by most. 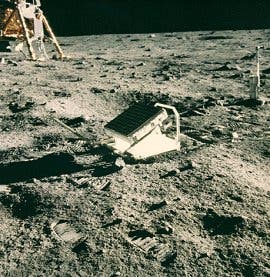 The Sea of Tranquility is a huge basaltic plain on the Moon, where the first human mission ever landed on the Moon. There, next to the famous footprint, still lies a 2-foot wide panel studded with 100 mirrors pointing at Earth: the “lunar laser ranging retroreflector array”. Armstrong and Aldrin put it there on July 21, 1969, less than an hour before their last moonwalk (no Michael Jackson jokes, please). Now, thirty-five years later, it is the only Apollo scientific experiment still functioning.

Here’s how it works, basically: a laser pulse shoots out of a telescope on Earth, travels the distance to the satellite and this the array. Because the mirrors are “corner-cube reflectors”, they send the pulse exactly where it came from, pretty much like hitting a squash ball in the corner of the room. Back on Earth, the pulse is recaptured, even though it usually consists of a single photon, thus giving an incredibly accurate estimate of the Earth-Moon distance, which is usually just a few cm bigger than 385,000 km. 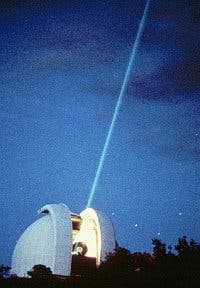 Of course, targeting the mirrors and then recapturing the pulse is a tricky business, but astronomers have been successfully doing it for the past 35 years, and in this way, the Moon’s orbit was more accurately calculated. But even more interestingly, we’ve found out more things about the satellite this way:

Physicists have also used this array to test Einstein’s theory of relativity, since before particle accelerators were a big thing, and so far, so good. All in all, just one piece of simple device, a mirror array, helped us learn so much, we just have to pay tribute to it, and the people who thought of applying this system.