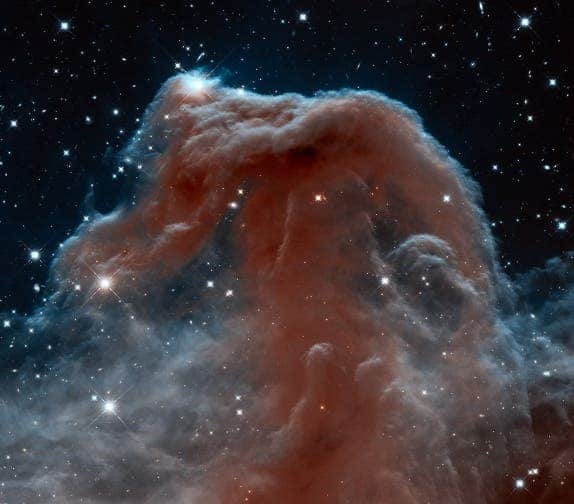 Two fantastic space telescopes, Hubble and ESA’s Herschel, have teamed up to image one of the most popular astronomical sights in the sky, the “Horsehead” nebula, in infrared  as well as longer wavelengths to provide unprecedented insights as to what’s going on in this stunning star hatchery.

Listed in catalogues under “Barnard 33”, but better known as the Horsehead nebula thanks to its distinctive shape, this fabulous molecular gas cloud lies some 1,300 light years away in the constellation Orion. Until recently, optical observations have made the nebula famous, but new infrared imaging shows the Horsehead in unprecedented detail.

Besides being a fabulous sight, the region is also a highly active star formation region, which makes it particularly appealing.

“You need images at all scales and at all wavelengths in astronomy in order to understand the big picture and the small detail,” said Prof Matt Griffin, the principal investigator on Herschel’s SPIRE instrument.

“In this new Herschel view, the Horsehead looks like a little feature – a pimple. In reality, of course, it is a very large entity in its own right, but in this great sweep of a picture from Herschel you can see that the nebula is set within an even larger, molecular-cloud complex where there is a huge amount of material and a great range of conditions,” the Cardiff University, UK, researcher told BBC News.

The image comes ahead of the 23rd anniversary of the telescope’s launch on the space shuttle Discovery on April 24, 1990. Its successor, the James Webb Space Telescope, is due to launch around 2018.