Last month, Elon Musk teased fans with a new space suit his company had been working on. It’s sleek, all white and black, really SciFi-looking , unlike the space suits NASA hasn’t been able to revamp for decades. Now, Musk shared a full-body picture of the space suit next to Crew Dragon, the next-generation spacecraft designed to carry astronauts into space.

Who wore it better?

Along with Boeing, SpaceX has been awarded a $2.6 billion contract to design and develop technology capable of carrying humans into space. The plan is expected to loosen the nation’s dependency on Russian logistics and things are shaping up nicely. Already, the Crew Dragon capable of carrying four people has passed the initial design reviews and certifications to proceed to the next level of testing.

Dragon made history in 2012 when it became the first commercial spacecraft to deliver cargo to the space station, a feat previously achieved only by governments.

If everything goes according to plan, a manned flight to the International Space Station on board a Dragon spacecraft should launch in late 2018 after an initial unmanned launch. The astronauts might travel to the space station wearing these new suits that seem taken right out of The Martian.

Looks can be deceiving, though. This is merely a pressurized suit, which isn’t suitable for space walks, let alone a trip outside Mars. Rather, these suits are designed to protect astronauts on route to the ISS in the unlikely event that their cabin becomes depressurized.

This new full-length press photo reveals some interesting details. The boots look very light-weight, giving the impression of enhanced mobility. Quite fashionable, too. The pants feature flex zones in the knee area for mobility when bending. Similarly, padded areas in the back colored in black also seem to be meant to enhance comfort while seated in the Dragon capsule.

Earlier this year, Boeing unveiled its own space suit — a bulkier blue version meant for astronauts riding Boeing’s Starliner space taxi. At less than 20 pounds, the suit weighs about 10 pounds less than the traditional orange launch-and-entry suit used during the shuttle era. 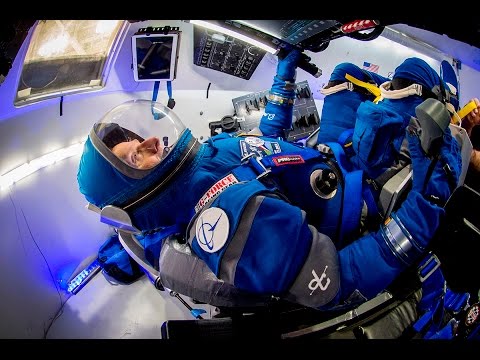 It’s thus quite exciting to follow how both of these private enterprises are making huge progress. Now, which of the two is your favorite?