Old-school letter writers will be able to adorn their envelopes this year with nice images of all the planets in the Solar System, as well as Pluto, the Moon and Star Trek icons.

I can only assume how many people still use stamps and regular post, but I’m happy to see the US Post use something different than plants and famous people. A 16-stamp sheet entitled “Views of Our Planets” and another four-stamp sheet labeled “Pluto—Explored!”  will commemorate the first fly-by of Pluto – the New Horizons fly-by from this summer.

It is hoped that the collection will spark public interest in science, said Richard Fienberg, director of communications for the American Astronomical Society. He praised the entire collection, saying it was quite profound.

“Even the phrase ‘Our Planets’ is profound, as it reflects the recent discovery that our planetary system is one of billions of such systems throughout the galaxy. Photos like the ones on the stamps, and discoveries like the prevalence of planets around other stars, inspire students to become scientists and engineers, guaranteeing that the process of discovery will continue,” he added. 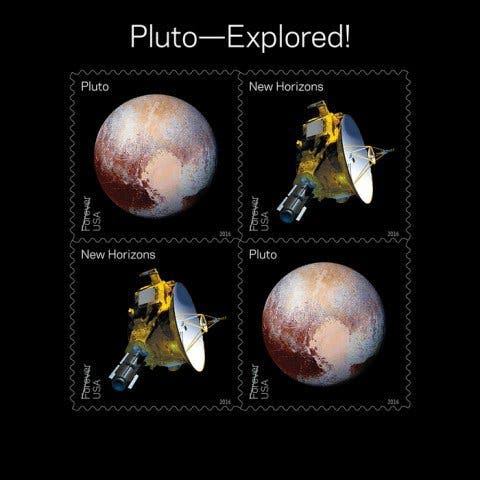 However, others have argued that this is just too small of a gesture. In 1991, the United States issued a Pluto stamp that stated “Pluto: Not Yet Explored.” Rather ironically, one of those stamps was boarded on the New Horizons shuttle as it flew by Pluto. Emily Lakdawalla, senior editor and planetary evangelist for the Planetary Society wanted new challenges from the Post office – especially as space exploration has advanced so much.

“I’d like to see a new challenge from the postal service, to explore unexplored distant worlds, like Haumea, Eris, or Sedna—or even some of the worlds in other solar systems, none of which had even been discovered when the Postal Service issued its ‘Pluto: Not Yet Explored’ stamp in 1991.” Nonetheless, she told Eos, she will be “thrilled” to use the new stamps on her correspondence.