by Mihai Andrei
in Astronomy, Astrophysics, Remote sensing
A A

Astronomers are baffled by a pulsar heavier than the Sun and smaller than New York which alternatively switches on and off between radio and X-ray emissions. 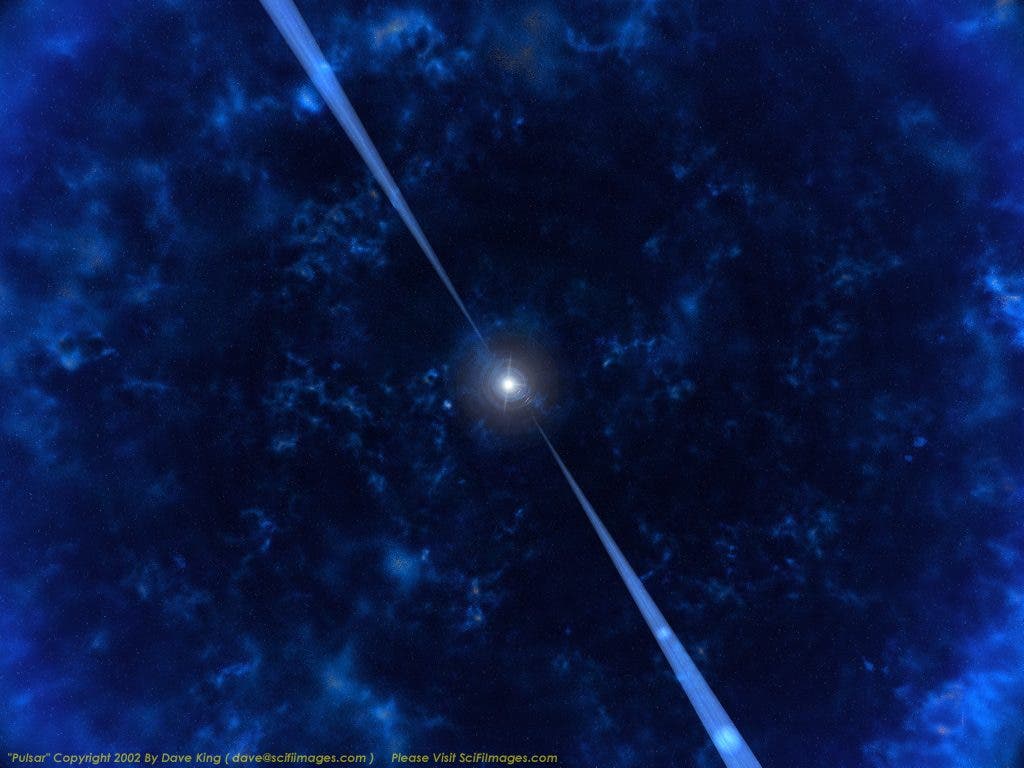 Pulsars are highly magnetized, rotating neutron stars, with a radius in the order of about 10 km, made up of neutrons. It is the result of a supernova explosion, representing basically the core of the star, after all its other parts have been eliminated during the supernova explosion. They are not heavy enough to become black holes, but they are also not light enough to turn into white dwarfs.

It is not perfectly understood just why pulsars emit radio-frequency and X-ray radiation but it is almost certainly related to the magnetic field at the surface of the neutron star. The radio pulses (and sometimes the pulses are observed in other parts of the spectrum, like visible light, for example), apparently arise near the polar cap and are emitted much like a lighthouse emits light – it continually rotates, and when aimed at you, you can see the light. The time for such a pulse varies between 1 seconds and 1 milisecond.

“As well as brightening in the X-rays we discovered that the X-ray emission also shows pulses, something not seen when the radio emission is bright,” says University of Vermont astrophysicist Joanna Rankin. “This was completely unexpected.”

In just a few seconds, the pulsar named PSR B0943+10 can damp down its radio waves, while at the same time making its X-ray emissions much brighter – something which, by all our understanding of pulsars, shouldn’t happen. It is the first time that a switching X-ray emission has been detected from a pulsar, and the properties of this emission have astronomers stunned. As the current proposed mechanisms can’t explain this behaviour, researchers are once again going to the drawing board, reopening the debate about the physical mechanisms powering the emission from pulsars.

Even though some 2000 pulsars have been discovered since 1967, few objects are as intriguing and surprising as them.

“There is a general agreement about the origin of the radio emission from pulsars: it is caused by highly energetic electrons, positrons and ions moving along the field lines of the pulsar’s magnetic field, and we see it pulsate because the rotation and magnetic axes are misaligned,” Wim Hermsen from SRON, the Netherlands Institute for Space Research in Utrecht, The Netherlands, said. “How exactly the particles are stripped off the neutron star’s surface and accelerated to such high energy, however, is still largely unclear,” he said.

The thing is, instead of narrowin things down and eliminating some models while validating others, this result pretty much invalidates all models proposed so far.

“Many pulsars have a rather erratic behaviour: in the space of a few seconds, their emission becomes weaker or even disappears for a while, just to go back to the previous level after some hours,” Hermsen said. “We do not know what causes such a switch, but the fact that the pulsar keeps memory of its previous state and goes back to it suggests that it must be something fundamental,” Hermsen said.

The correlations seems to lead astronomers to believe that there is a tight connection between the star’s surface and the much-larger surrounding magnetosphere, which may extend up for 40.000 km, or even more.

“If that is true, it means the entire magnetosphere is alive and connected in very important ways,” says Rankin.

Either way, one thing’s for sure: we need to reevaluate our knowledge of pulsars.

Via University of Vermont