Astronomers from the Arizona State University have used NASA’s Lunar Reconnaissance Orbiter (LRO) this mind blowing map of the Moon; it is the highest resolution near-global topographical map of our neighbor so far. 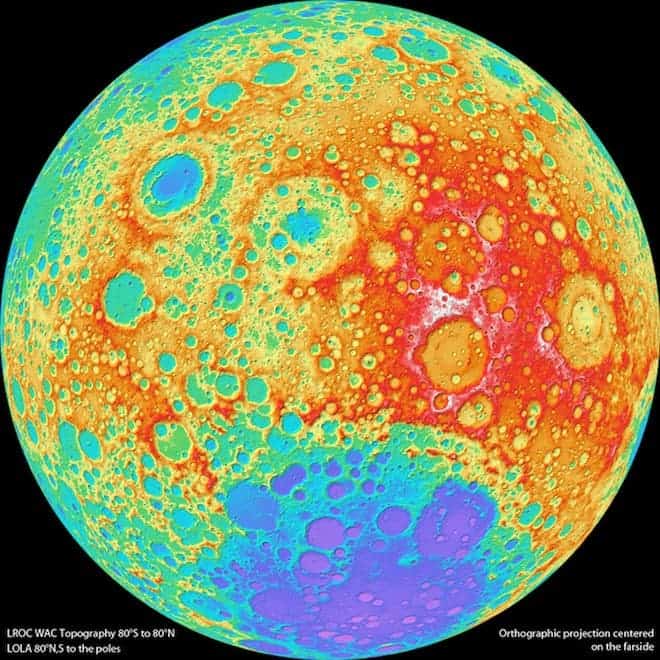 As you’ve probably already figured out, the map reveals the Moon’s surface, using colors to depict elevation – from white and red (highest) to purple (lowest). Now I don’t know about you, but if you ask me, this map is absolutely glorious, and it looks delicious too (kind of a pancake, wouldn’t you say?). But the way the map was created is perhaps even more wonderful.

It was created using the orbiting probe’s Wide Angle Camera (WAC), a device so small that you could literally hold it in your hand. But even though its size isn’t impressive, it can capture an astonishing view of the Moon 70 km wide. Due to the fact that the Moon’s lighting changes every 30 days, the WAC can record how different rocks reflect and shade the light and built this topographic wonder.

However, the little camera can’t do it all by itself. The satellite’s poles are almost constantly shrouded by darkness – but have no fear, the LRO’s Lunar Orbiter Laser Altimeter is here, and it excels at scanning the topography of the poles.

“Our new topographic view of the moon provides the dataset that lunar scientists have waited for since the Apollo era,” said Mark Robinson, Principal Investigator of the Lunar Reconnaissance Orbiter Camera (LROC) from Arizona State University, in a press release.

“We can now determine slopes of all major geologic terrains on the moon at 100 meter scale. Determine how the crust has deformed, better understand impact crater mechanics, investigate the nature of volcanic features, and better plan future robotic and human missions to the moon.”