Nope, no doomsday supernova in 2012

by Mihai Andrei
in Offbeat, Space
Reading Time: 2 mins read
A A
Share on FacebookShare on TwitterSubmit to Reddit

There are people out there who predict that the entire life on Earth will be wiped out in 2012 – or at least significantly crippled. But if you stop just a second and think about it rationally, you understand that this is nothing else but jibber jabbar, and people like this will keep ‘announcing’ the end of the world for years and years after today. Still, it’s sad that NASA is forced to make an announcement that the world won’t end via a violent supernova next year. 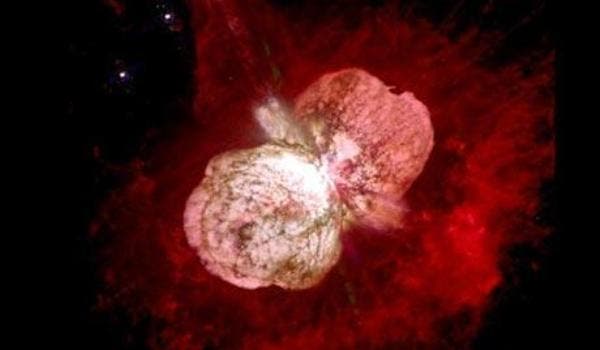 The movie ‘2012’, which was declared the most absurd sci-fi movie ever sparkled the imagination of many, but not in the right direction. After comet Elenin quietly passed by Earth and nothing happened, now people have moved over to supernovas – which prompted Francis Reddy, of NASA’s Goddard Spaceflight Center, went on the record to say: “…astronomers can say with certainty that there is no threatening star close enough to hurt Earth”. Bam! That’s it! No comet, no supernova, nothing! So before you rush up to the nearest library and buy your next Apocalypse book think about this: you are being conned! Conned by people who believe or don’t believe what they write, but are wrong.

“Astronomers estimate that, on average, about one or two supernovae explode each century in our galaxy,” says Reddy. “But for Earth’s ozone layer to experience damage from a supernova, the blast must occur less than 50 light-years away.”

Hey, guess what? The nearest star with a (very remote) chance of going supernova is much, much further away than 50 light years. So, considering how everybody’s giving their two cents on how the world will end, here’s mine (senseless rambling ahead):

A comet hits Earth, right in the Eastern African rift, which dramatically begins expanding; it expands so much, that the mole titan people from the center of the Earth have enough room to go outside. We fight them, but it’s too much for us and there seems to be no hope, until the aliens come and destroy them; we hail them, but then they attack us too. By then though, radioactive emissions from the mole titans have caused incredibly severe mutations in dolphins, which are super smart, defeat the aliens and enslave us as well. All hail our dolphin overlords! Well what? Makes as much sense as the next scenario.

The well being of our planet lies in our hands – and no one can hurt us like we can. Think about this instead.