The Halley comet, perhaps the most infamous of them all, will light the night sky in a dazzling display which will be visible for everybody, if the weather permits.

The light in the sky 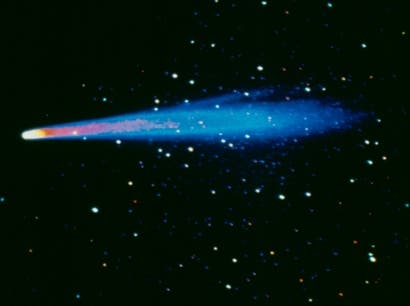 The annual Eta Aquarid meteor shower will peak early tomorrow morning and will probably thrill nightgazers, if we will be lucky enough to have a clear sky. Another good news is that due to its position, the Moon won’t interfere with the meteor shower, like it did with last month’s Lyrid shower.

The Eta Aquarids are meteors created by the bits and pieces left behind by the Halley comet, which travels through the solar system on its 76 year orbit. Technically speaking the display lasts from April 28 through May 21, but tomorrow (May 6) will mark it’s definite peak, at least according American Meteor Society.

“Under ideal conditions (a dark, moonless sky) about 30 to 60 of these very swift meteors can be seen per hour,” advises SPACE.com skywatching columnist Joe Rao. “And with a new moon on May 3 this is one of those years when observing conditions will be perfect.”

The conditions appear to be perfect, and aside from the occasional cloud (or of course, pollution), there should be nothing standing between you and the meteor shower. The Earth passes through Halley’s trail of debris twice a year, once in October, and of course, once in May. but this is only a teaser for when the comet will really pass close to our planet, in 2061.

The Halley comet is without a doubt the most known of all the short period comets, and it is visible on our planet every 75 or 76 years, which means there’s a pretty good chance you will get to see it – but only once. Still, it is the only comet that is clearly visible with the naked eye, and even though other comets might be brighter, they only pass in front of our planet every several centuries or so.

Astronomers have reported the Halley comet since at least 240 BC, and about two milleniums later, in its 1986 apparition, it became the first comet to be observed in detail by spacecraft, providing extremely important information about the comet nucleus and the ‘metabolism’ and behaviour of the comets.

So skygazers, if the weather is kind to you, go and enjoy this lovely meteor shower, because the conditions this year are excellent; and if you happen to make a picture or two, do be so kind and share them with the rest of us.