NASA’s Kepler telescope is on a roll – recently, astronomers working on it discovered a new planetary system that is home to the smallest planet yet found orbiting a star similar to our sun.

A similar star, a different system

The planets are located in a system researchers call Kepler-37, just over 200 light years, in the constellation Lyra. The smallest planet, Kepler-37b, measures about one third of our Earth, making it significantly smaller than even Mercury; this size made its discovery quite the challenge.

“We uncovered a planet smaller than any in our solar system orbiting one of the few stars that is both bright and quiet, where signal detection was possible,” said Thomas Barclay, Kepler scientist at the Bay Area Environmental Research Institute in Sonoma, Calif., and lead author of the new study published in the journal Nature. “This discovery shows close-in planets can be smaller, as well as much larger, than planets orbiting our sun.”

The rather moon-sized planet and its two planetary companions are interestingly located in the so-called habitable zone – the region in a planetary system where there are the necessary conditions for liquid water to exist. But even in the habitable zone, and even orbiting a star much similar to our Sun, Kepler-37 is very different from our solar system.

Astronomers are fairly convinced that Kepler-37b does not have an atmosphere and cannot support life as we know it. Less is known about its neighbors: the middle star is just a little smaller than Venus (measuring 3/4 the size of the Earth), while the farthest one is twice as big as our planet. All three planets orbit their star closer than Mercury orbits the SunEven if none of these planets can support life as we know it (which is uncertain at the moment), finding them is still important.

“Even Kepler can only detect such a tiny world around the brightest stars it observes,” said Jack Lissauer, a planetary scientist at NASA’s Ames Research Center in Moffett Field, Calif. “The fact we’ve discovered tiny Kepler-37b suggests such little planets are common, and more planetary wonders await as we continue to gather and analyze additional data.” 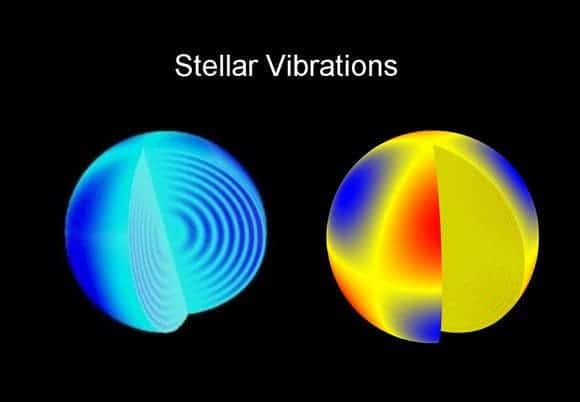 Astrophysics and geophysics have a lot in common; much like seismologists on Earth study waves generated by earthquakes to figure out the interior of the planet to shocking depths, astroseismologists (I believe this is the correct term, though I’m not certain) examine sound waves generated by the boiling motion beneath the surface of the star.

These waves bring with themselves information from beneath; they cause oscillations that Kepler observes as a rapid flickering of the star’s brightness. Like bells in a steeple, small stars ring at high tones while larger stars boom in lower tones. Of course, barely discernible, high-frequency oscillations in the brightness of small stars are the hardest to spot – which is why typically, observed objects are larger than the sun.

But with the very high precision of the Kepler instrument, astrophysicists have reached a new milestone. The star discovered in this system is the smallest ever discovered, and researchers have its radius pinned down to 3 percent accuracy, which is just exceptional.