In a knitted spacesuit and a tight fitting helmet, Camilla, the rubber chicken bravely flew towards the edge of the atmosphere as the Sun unleashed the most intense radiation storm since 2003. 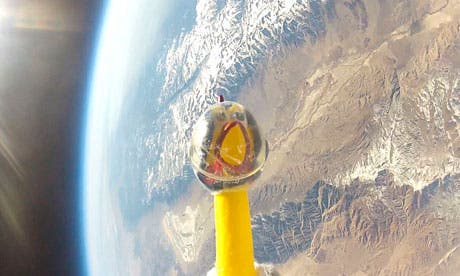 The mascot of Nasa’s Solar Dynamics Observatory lofted towards the stratosphere on a helium balloon that also carried a thermometer, two GPS trackers and four cameras, thanks to which we can see the courageous rubber chicken. Now if you’re like me, you might ask yourself why is a rubber chicken heading directly into outer space; well the mission was launched by students at Bishop Union high school in Bishop, California, and it started its flight before the storm, on 3 March, and valiantly continued its journey despite freezing temperatures of under -60 degrees and a massive solar storm.

Carried aboard the mission was an astrobiology experiment that subjected seven insects and 24 sunflower seeds to the extremes of near-space altitudes. The sunflower seeds were a variety known as “Sunspot” or Helianthus annuus. Sadly, none of the insects survived the trip to outer space, but students are still pretty happy about their experiment anyway.

“Camilla’s trip to the stratosphere gave us a chance to talk to thousands of people about the radiation storm,” said Romeo Durscher, who looks after the rubber chicken at Stanford University.