by Mihai Andrei
in Astronomy, Astrophysics
A A

A ring of radiation that scientists knew nothing about fleetingly surrounded our planet last year, before being blown away by a powerful interplanetary shock, researchers say. 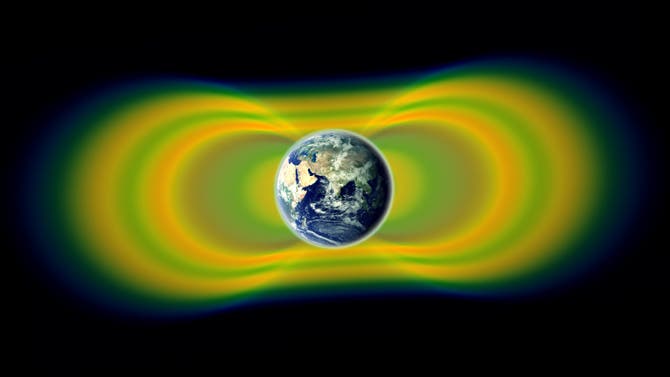 Usually, whenever NASA launches a spacecraft, they wait weeks or even months to finely tune all its instruments. It’s a rite of passage that all shuttles (and rovers) have to pass through; however, when the Van Allen Probes were launched, a group of scientists on the mission made a surprise decision and changed the plan – and man were they inspired!

They asked that the Relativistic Electron Proton Telescope (REPT) be turned on really early – just three days after the launch, in order for its observations to overlap those of SAMPEX (Solar, Anomalous, and Magnetospheric Particle Explorer), that was soon going to de-orbit and re-enter Earth’s atmosphere. Some would say it was a lucky decision, but I call it a case of the intuition – shortly before REPT turned on, solar activity on the sun had sent energy toward Earth that caused the radiation belts to swell.

Then, something that nobody had ever seen before happened: the particles settled into a new configuration, showing an extra, third belt extending out into space. Within mere days of its launch, the Van Allen Probes were rewriting textbooks.

“By the fifth day REPT was on, we could plot out our observations and watch the formation of a third radiation belt,” says Shri Kanekal, the deputy mission scientist for the Van Allen Probes at NASA’s Goddard Space Flight Center in Greenbelt, Md. and a coauthor of a paper on these results. “We started wondering if there was something wrong with our instruments. We checked everything, but there was nothing wrong with them. The third belt persisted beautifully, day after day, week after week, for four weeks.”

The results were published on Feb 28 in Science, and took everybody by surprise.

NASA discovers extra radiation ring around Earth by Van Allen Probes.
[Pin It] Two giant swaths of radiation, known as the Van Allen Belts, surrounding Earth were discovered in 1958. In 2012, observations from the Van Allen Probes showed that a third belt can sometimes appear. The radiation is shown here in yellow, with green representing the spaces between the belts.
CREDIT: NASA/Van Allen Probes/Goddard Space Flight Center
View full size image 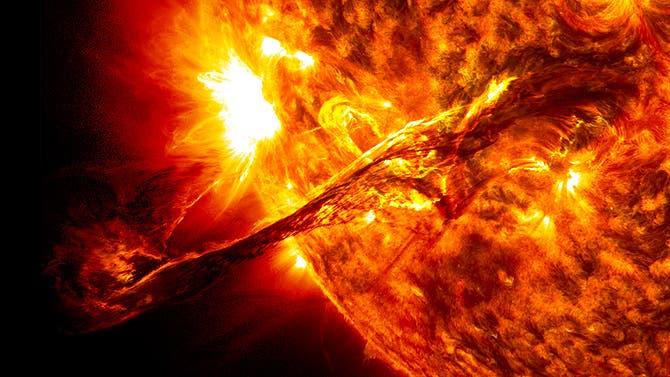 NASA’s twin Van Allen space probes, which are studying the Earth’s radiation belts, made the cosmic find. The surprising discovery — a new, albeit temporary, radiation belt around Earth — reveals how much remains unknown about outer space, even those regions closest to the planet, researchers added.

“They were something we thought we mostly understood by now, the first discovery of the Space Age,” said lead study author Daniel Baker, a space scientist at the University of Colorado.

Spotting such a previously unknown belt has more implications than merely its presence – it implies there’s something more we don’t know about this kind of phenomena. In a region of space that remains so mysterious, any observations that link certain causes to certain effects adds another piece of information to the puzzle.

Baker compares this to a particle accelerator: in accelerators, physicists use magnetic fields to make the particles orbit in a circle, while energy waves are used to accelerate the particles more and more; everything must be perfectly tuned to the size and shape of that ring, and the characteristics of those particle. The Van Allen radiation belts are similar from that point of view – they depend on such fine tuning. If researchers understand the geometry of the belt, they can understand the particles.

“We can offer these new observations to the theorists who model what’s going on in the belts,” says Kanekal. “Nature presents us with this event – it’s there, it’s a fact, you can’t argue with it — and now we have to explain why it’s the case. Why did the third belt persist for four weeks? Why does it change? All of this information teaches us more about space.”

Astronomers already had several theories, but this discovery of the third belt pretty much blows everything open – but it can only add to our knowledge.

“I consider ourselves very fortunate,” says Baker. “By turning on our instruments when we did, taking great pride in our engineers and having confidence that the instruments would work immediately and having the cooperation of the sun to drive the system the way it did – it was an extraordinary opportunity. It validates the importance of this mission and how important it is to revisit the Van Allen Belts with new eyes.”