Mystery of energy ribbon around our solar system possibly solved

by Mihai Andrei
in Astronomy, Astrophysics

It was a mystery that kept astronomers scratching their heads for years, but now, it finally seems to be cracked: particles from inside the solar system bounce off a “ribbon” of energy boundary and neutral atoms from that collision stream inward. Why and how this happens remained a mystery for quite a while. 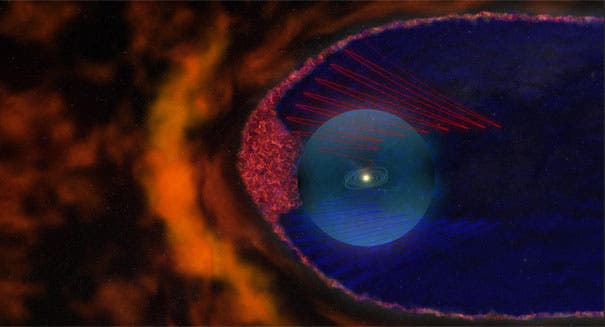 Basically, this strange band of energy seems to wrap itself around the solar system creating a sort of energy field that push particles inward. The ribbon of energy was discovered three years ago, the result of NASA’s Interstellar Boundary Explorer (IBEX) mission. Since this has been identified, more data has been collected and several teams from different countries have been working on the matter.

In a recent article published in the Astrophysical Journal puts forth a “theory of retention” – that for the first time explains the key observation of the unexplained ribbon’s width. To put it simple, the theory claims that such a band of energy exists where neutral, non-ionized Hydrogen atoms from solar wind meet a local galactic magnetic field. Why? Well, neutral atoms are affected by this magnetic field, become ionized with their electrons torn away, and then begin gyrating rapidly around magnetic field lines. The end result is that the ionized atoms are aiming back towards the sun, creating the energy band astronomers observe today. Here’s a good analogy:

“Think of the ribbon as a harbor and the solar wind particles it contains as boats,” said Nathan Schwadron of the University of New Hampshire and lead author of the study. “The boats can be trapped in the harbor if the ocean waves outside it are powerful enough. This is the nature of the new ribbon model. The ribbon is a region where particles, originally from the solar wind, become trapped or retained due to intense waves and vibrations in the magnetic field.” 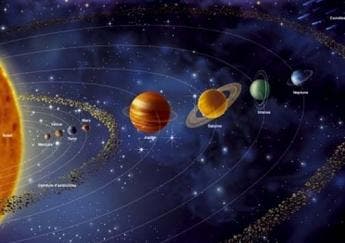 While this is not the first attempt to explain this astronomic puzzle, it is indeed the first one to tackle an overlooked aspect: rapid rotation creates waves or vibrations in the magnetic field, with the ions becoming physically trapped in an area (“harbor”), which in turn amplifies the ion density and produce the broader ribbon seen. This is definitely hard to wrap your head around, but this is about as simple as one can put it.

“The ribbon can be used to tell us how we’re moving through the magnetic fields of the interstellar medium and how those magnetic fields then influence our space environment,” said Schwadron.