Water churned up from Saturn’s depths by massive storm

If you were to look at them from the safety and serenity of your home, the gas giants of our solar system seem to be quite peaceful. Their surface appears smooth, unscathed by meteor impacts or other such phenomena – but this couldn’t be further from the truth, as they sometimes show us. 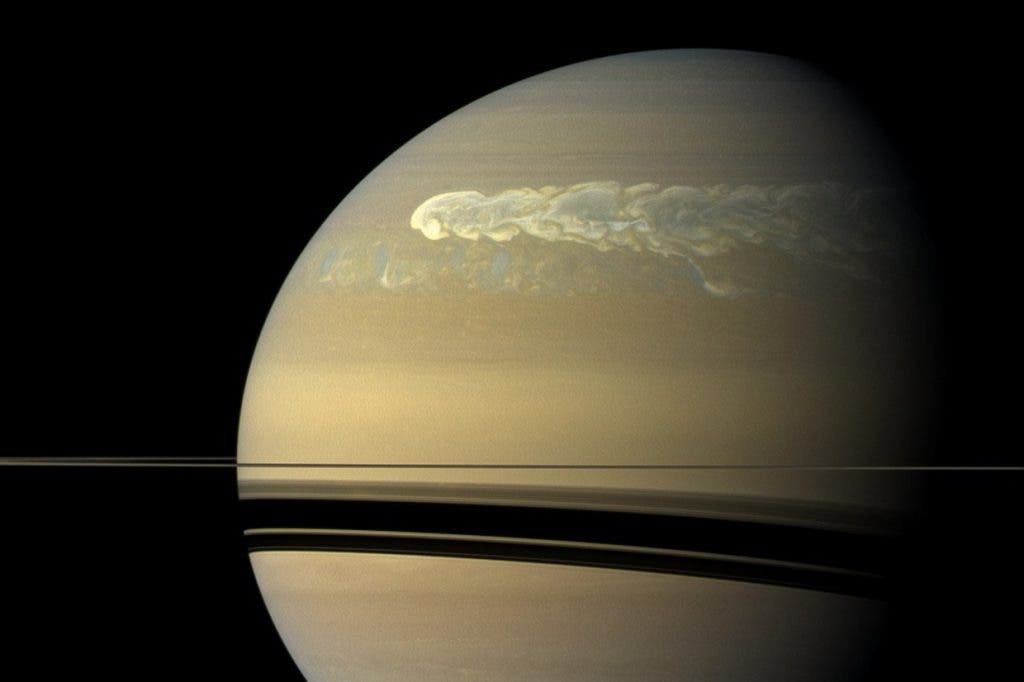 In 2010, Saturn began stirring things up, with a giant storm; the storm quickly grew to amazing proportions, reaching 15,000 kilometers (more than 9,300 miles) in width and visible to amateur astronomers on Earth as a great white spot dancing across the surface of the planet.

Now, thanks to near-infrared spectral measurements taken by NASA’s evergreen Cassini orbiter and analysis conducted by the University of Wisconsin-Madison, Saturn’s superstorm is helping researchers understand more about the planet’s deep atmosphere – at heighs typically obscured by a thick haze.

Astronomers found that loud particles at the top of the great storm are composed of a mix of three substances: water ice, ammonia ice, and… something else, which is yet to be identified – possibly ammonium hydrosulfide. The phenomena which brought these substances forth is also significant.

“We think this huge thunderstorm is driving these cloud particles upward, sort of like a volcano bringing up material from the depths and making it visible from outside the atmosphere,” explains Sromovsky, a senior scientist at UW-Madison and an expert on planetary atmospheres. “The upper haze is so optically pretty thick that it is only in the stormy regions where the haze is penetrated by powerful updrafts that you can see evidence for the ammonia ice and the water ice. Those storm particles have an infrared color signature that is very different from the haze particles in the surrounding atmosphere.”

“The water could only have risen from below, driven upward by powerful convection originating deep in the atmosphere. The water vapor condenses and freezes as it rises. It then likely becomes coated with more volatile materials like ammonium hydrosulfide and ammonia as the temperature decreases with their ascent,” Sromovsky adds.