The Fermi Space Telescope has catalogued the 514 most powerful objects in the Universe, that we know of. Astrophysicists don’t know what over 10% of them are. 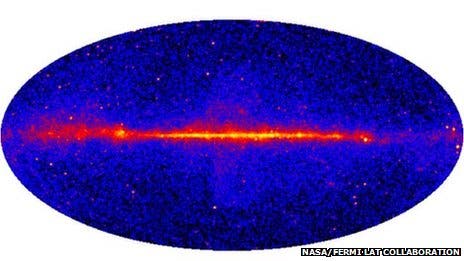 The idea was to catalog the objects which emit γ-ray sources at energies above 10 GeV. What’s a GeV? It stands for Giga electronvolt, which is 1 billion electronvolts. Aha, you may ask, but what’s an electonvolt? It’s a unit of energy, much like the Joule, except it’s much smaller (approximately 1.6×10−19 joules in 1 eV).

This energy range has not really been thoroughly studied – so the idea was to take all the objects in the known universe and separate those which are the most powerful energy sources.

“The idea is to have some sort of bridge catalogue between the typical catalogue done by Fermi… which contains thousands of sources, and the domain of the Cerenkov telescopes that have been operating over 20 years,” lead author of the new catalogue, David Paneque of the Max Planck Institute for Physics in Munich, Germany, explained.

But, as always with this kind of study, they also stumbled upon “unassociated sources”. So what are these unknown objects?

“What that means is that we know it’s a gamma-ray source, but we don’t know what kind of source,” he explained. “We can’t associate it with a radio object, with an optical object. It might be actually a new class of object – something that only emits in gamma rays.”

They could be things like dwarf galaxies composed of dark matter – things we don’t really know about, and astrophysicists would love to know more of. It could be unidentified quasars, but if this is the case, why haven’t astronomers identified them already?

Either way, something interesting will pop up – even if it’s only a small fraction, it’s more than enough to stir up an astronomic curiosity.