Astronomers spot galaxy made out of mostly dark matter

by Mihai Andrei
in Astronomy, Astrophysics, Space
Reading Time: 2 mins read
A A
Share on FacebookShare on TwitterSubmit to Reddit

Using a technique called ‘gravitational lensing’, astronomers were able to spot a dwarf galaxy, some 10 billion light years away, which they believe is made out mostly of dark matter. 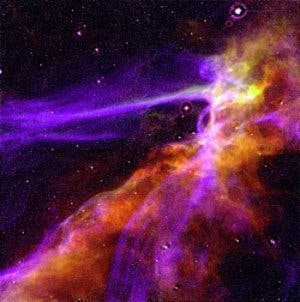 It is only the second ‘black dwarf’ ever found – why there are so few of them is one of the biggest questions in astronomy. Even though dark matter is really hard to spot because it doesn’t interact with light, we should have found many, many more such galaxies, but at least in our corner of galactic neighborhood, there just aren’t any. Such galaxies are also called satellites.

“According to the theory of galaxy formation, you’d expect thousands of these satellites,” explained lead author of the study Simona Vegetti of the Massachusetts Institute of Technology. “But if you look at the Milky Way we only find 30, so it’s important to understand how many satellites are really there, and important to look at other galaxies other than the Milky Way,” she told BBC News.

This finding has its importance in the fact that it could provide information which might clear out what we got wrong about this theory.

Even though dark matter doesn’t interact with light, it is believed to amount for some 85% of all the mass in the Universe, and those effects are quite visible. The technique they used, gravitational lensing uses an object that lies between Earth and a distant light source can actually act as a “lens”, bending the light, magnifying and distorting it. By using advanced computer models they can determine where and how the mass is distributed.

“It’s very hard to tell at the moment because the telescopes are just not powerful enough to see such dim galaxies so far away,” Dr Vegetti said. “But [the dwarf galaxy] is most likely dominated by dark matter, or maybe there are a few stars hiding here and there.”

However, this is just the beginning, and the team must continue their search if they want to get to the bottom of this black mystery.