Jupiter's satellite Europa is definitely one of the most interesting places in our solar system - despite being really far from the Sun and frozen on the surface, NASA researchers actually believe it is the best bet to search for extraterrestrial life. Now, scientists and engineers have actually planned a mission aimed to reveal whether life on Europa exists or not.

by Dragos Mitrica
in Alien life, News
A A

Jupiter’s satellite Europa is definitely one of the most interesting places in our solar system – despite being really far from the Sun and frozen on the surface, NASA researchers actually believe it is the best bet to search for extraterrestrial life. Now, scientists and engineers have actually planned a mission aimed to reveal whether life on Europa exists or not.

“Europa is clearly such a prime target for astrobiology that having a workshop like this to try and figure out all the ways in which we could possibly sample its ocean … [is] critically important,” said Kevin Hand, an astrobiologist at California’s Jet Propulsion Laboratory, who was at the meeting. 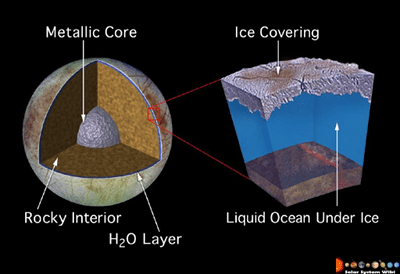 Several reports concluded that the icy moon might harbor life. Despite being extremely far from the Sun and therefore frozen on the surface, there is significant evidence that under the ice, there is actually an ocean of liquid water. Europa is thought to have a hot, iron core and an ocean underneath its thick crust of ice on the surface. Measurements indicate that the ocean is in liquid form and is actually warm, heated by the tidal stresses exerted on Europa by Jupiter and several other large moons, as well as by radioactivity. The required substances and elements to harbor life are mixed and flowed through the ocean by the same powerful currents. So all in all, there’s a very good environment with a lot of potential of fostering life.

Scientists have decided on a mission called Clipper. The Europa Clipper is a concept still under development, but it will cost an estimated $2.1 billion and could launch as early as 2022. The plan is for the shuttle to brush by Europa about four dozen times over three and a half years, snapping photos and taking a good, close look at the moon.

“We are going to do a Europa mission, and I’m very excited about that,” said John Grunsfeld, a former astronaut who is now NASA’s associate administrator for the science mission directorate. “I think it’s unlikely that Congress is going tell us, ‘No, NASA shouldn’t be doing a Europa mission.’ Very unlikely.”

Still, just flying by isn’t going to help us learn whether or not life exists on Europa. There are a number of ideas floating around – the craziest one being blasting a piece of the satellite and measuring what flies out of it. A more tame (and likely) approach is to land a probe and have it look in the ice for life signatures, while the ideal version would involve also launching a submarine to dive in the under-ice waters.

But there are also serious hurdles – it will be a huge scientific and engineering task and will come with a hefty price tag. There is also the problem of contamination – if life does exist on Europa, then we might contaminate it with microorganisms brought from Earth. So an idea that popped up in this meeting is to have a probe orbit the satellite at close range and simply test the plumes of water vapor that erupt from the moon’s surface into space. In 2013, astronomers observed 200 km high plumes spurting from Europa’s surface. This would allow researchers to test the water without actually landing on Europa. However, the problem here is that these plumes can be very unpredictable and likely only erupt sporadically.

“The plumes, if they exist, offer an incredible opportunity to go in and measure something and even search for life itself,” said Scott Bolton of the Southwest Research Institute, in San Antonio. “We don’t want to design an entire mission that’s based on that because they’re hard to see … but we do need to take advantage of this.”

So the desired method of test hasn’t been decided yet, but in the end, variety will probably be the better option – different types of data are better than any approach alone.

“The data we take from these spacecraft will last forever. And we’re not going to get a lot of opportunities to do these kinds of things,” says planetary scientist Sarah Hörst of Johns Hopkins University, in Baltimore. In the future, she says, when we might have a better idea of how to detect alien life, we will want to have enough data to mine for those extraterrestrial signatures.

As for what we should be looking for… this again is an open question; we have to be prepared for anything. Europan life may or may not exist, it might be microscopic or macroscopic (though the former seems more likely), and its chemistry might be different from anything we know.

“We need to go look for complexity,” said Lee Cronin of the University of Glasgow. Complex molecules—those with branches and different types of atoms—are usually clues that some kind of living factory is churning away nearby, he said.