Meet the Yoda worm – a creature living deep, deep in the ocean

by Tibi Puiu
in Animals, Science
A A 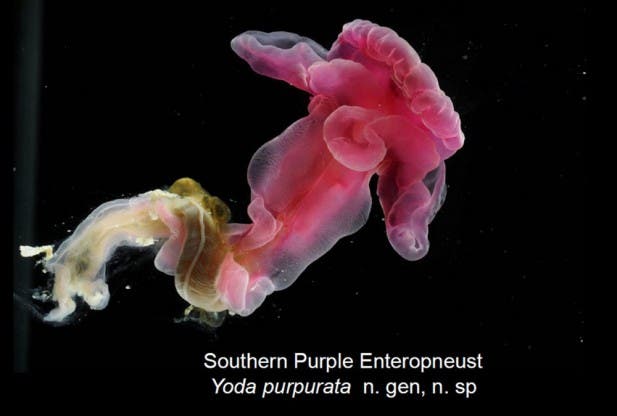 A curious specimen which bares a resemblance to the iconic Jedi master Yoda, due to its large lips on either side of the creature’s head reminiscent of the Jedi’s ears, has been recently collected from far, far away in the ocean depths. Upon closer inspection it along with two other creatures have been recognized as distinct species.

Dubbed Yoda purpurata, the tiny deep-sea acorn worm was discovered 1.5 miles beneath the Atlantic, after a remotely operated submersible collected the specimen during a research mission along the Mid-Atlantic Ridge between Iceland and the Azores. The official translation of the worm’s name is “purple Yoda,” with the second part of the moniker representing the creature’s color.

“Shallow water acorn worms live in burrows and are rarely seen, whereas deep sea species live on the seafloor, leaving spiral traces of poo that resemble crop circles. These traces have been seen in fossil form, but until recently, nobody knew what produced them,” , Douglas Main of OurAmazingPlanet explained.

“Scientists are interested in these deep sea species because they are close to the evolutionary link between vertebrates and invertebrates,” he added. “In other words, the force is strong with them.”

Now, this isn’t the oddest name an animal species has received. Other notable mentions include a fish parasite named after Bob Marley; a horse fly named after Beyoncé and a trio of slime-mold beetles named after George Bush, Dick Cheney and Donald Rumsfeld.

Findings were published in the journal Invertebrate Biology.