Take me with you!

by Alexandru Micu
in News, Science, Space, Space flight
A A
Share on FacebookShare on TwitterSubmit to Reddit

To boldly go where just one has gone before.

The second member of the Voyager space probe family is emigrating from our solar system. Voyager 2 has exited the heliosphere — the limit of the Sun’s magnetic and plasma fields — back on November 5th, reported members of NASA’s Voyager team yesterday at the 2018 American Geophysical Union (AGU) fall meeting in Washington.

The craft is now over 11 billion miles away from Earth. Ground control says, based on sensor readings, that the craft exited the heliosphere around November 5th this year. The most compelling evidence comes from the craft’s onboard Plasma Science Experiment (PLS), NASA reports, a device that picks up on electrical currents in plasma to determine the speed, density, temperature, pressure, and flux of stellar wind in its area.

Up to now, the instrument primarily picked up on such winds (which are emissions of charged particles) generated by the Sun. Since Nov. 5th, however, it has recorded a steep decline in solar wind particles. Today, there’s no observable solar wind flow around Voyager 2, the team reports, making it overwhelmingly likely that it exited the heliosphere. Readings from three other onboard instruments — the cosmic ray subsystem, the low energy charged particle instrument, and a magnetometer — also support this conclusion.

To give you an idea of the distances involved here, keep in mind that it takes light from the Sun about 8 minutes to reach Earth. It takes roughly 16.5 hours to transmit a message from us to Voyager 2 (radio waves also travel at light-speed) at its current position.

That’s an impressive distance, but it’s not the longest trek our machines have ever pulled off — it’s the second longest. Voyager 2 follows its twin Voyager 1, which exited the heliosphere in 2012.

The heliosphere’s outer boundary, known as the heliopause, is the point at which solar winds lose their oomph and start mixing with the cold stuff of space (or, in science-speak, the “interstellar medium”). The team is excited that Voyager 2 is passing through, as it will provide first-of-their-kind readings from this exotic span of space. The probe still has a working PLS device onboard, while Voyager 1’s equivalent malfunctioned before it reached the heliopause.

Still, there’s a wealth of data to analyze already, and NASA researchers are very keen on better understanding the environment that Voyager 2 finds itself in currently.

“There is still a lot to learn about the region of interstellar space immediately beyond the heliopause,” said Ed Stone, Voyager project scientist based at Caltech in Pasadena, California.

“Voyager has a very special place for us in our heliophysics fleet,” said Nicola Fox, director of the Heliophysics Division at NASA Headquarters. “Our studies start at the Sun and extend out to everything the solar wind touches. To have the Voyagers sending back information about the edge of the Sun’s influence gives us an unprecedented glimpse of truly uncharted territory.”

Both probes have left the heliosphere but not the solar system. That boundary is considered to be the outer edge of the Oort Cloud, a bunch of small bodies still under the influence of the Sun’s gravity well. We don’t know exactly how wide the Cloud is, but it’s estimated Voyager would need some 30,000 years to fly through it. So don’t hold your breath on that one.

The Voyagers draw power from a radioisotope thermal generator (RTG), a device that relies on the nuclear decay of certain atomic species. Its output declines by around 4 watts each year. Several instruments aboard the Voyagers have been turned off over time to manage this diminishing power supply — but the RTGs won’t be able to deliver power indefinitely. Both crafts will run out of juice long before they exit the solar system. 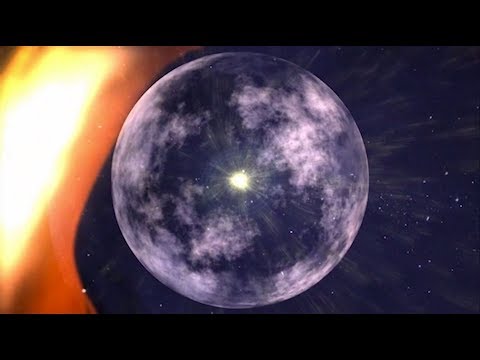