South Korean company Dot is launching the first-ever Braille Smartwatch to give visually impaired people the same connectivity of modern devices at the tips of their fingers.

Smartphones and smartwatches are pretty neat. They owe a big part of their appeal to the touchscreen — by merging the display with the input method, you get more ‘screen’ and better handling of the devices. But what opens up a whole new class of accessibility and convenience for you seems like nothing but an inert piece of plastic to visually impaired people.

With estimates placing the number of such people worldwide at over 285 million, that’s a lot of people not taking part in the fun. But one South Korean developer wants to bring the same level of connectivity in a medium that’s tailored to their needs. Named Dot, the company has unveiled the first ever Braille smartwatch under the same name.

The Dot Watch measures 43 mm (1,69 inches) in diameter and displays information through 4 proprietary dynamic Braille cells. These update the displayed information as if the user were running his or her fingers over a piece of static text. It offers users the option to change the speed at which the characters update on the screen for seamless reading, and two touch-sensitive areas to the left and right of the cells allow scrolling through the text.

It’s not a big device. Having only 4 pieces of text available might seem limited, but it’s enough to let the watch display time down to the second (the first Braille device to ever do so,) the date, and includes all basic watch functionalities such as a stopwatch or timer. Dot is confident that the freedom users will have in manipulating information through the touch sensors and auto scroll feature will allow them to easily access the information they require.

“The point is not to read a whole book, much like sighted users who won’t read a novel on a smartwatch — it’s to be mobile and connected,” a press kit from Dot reads.

The device also pairs to smartphones via the ubiquitous Bluetooth so it can receive, translate, and display all the information a phone would. Think alarms, texts, or messages from any platform (such as Messenger, directions from Google Maps, etc).

“When paired with a smartphone, additional functions [become available] such as receiving and reading notification messages, checking the caller information and receiving/rejecting the call, alarm, and “Find my phone” – a function that, when activated, calls up your connected phone with a loud “beep” and vibration,” Dennis Jung, Dot’s Account Executive, told me in an e-mail.

It’s not only about receiving, either — there are plans to enable Dot users to send simple messages using buttons embedded into the side of the device, although this feature may not be available in the first model.  It also supports Open API, so new apps and functions for the phone can be developed independently, lending huge flexibility to the device. 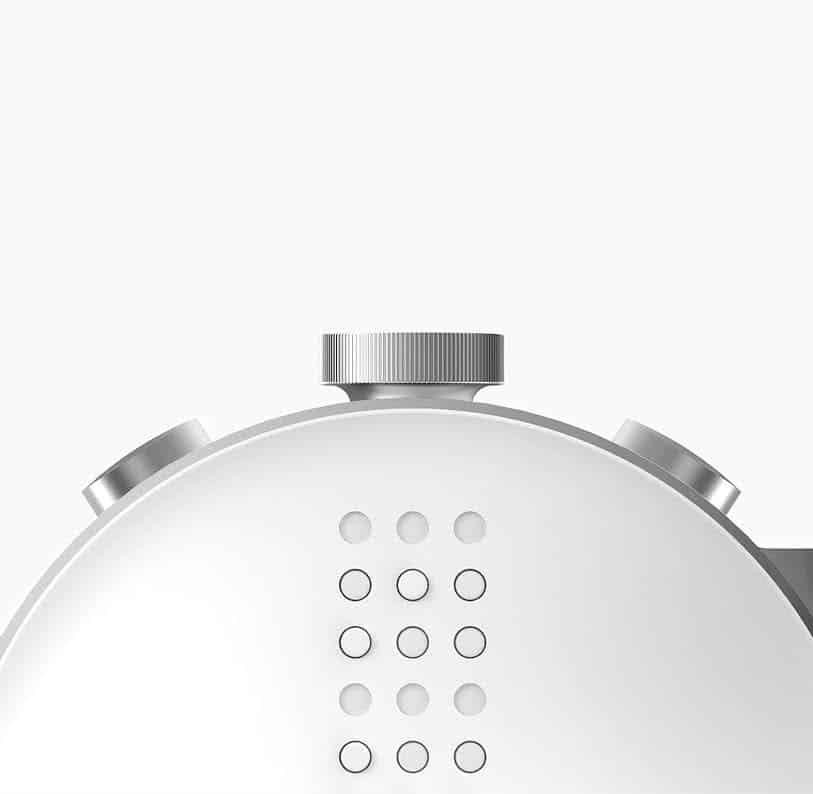 The Dot comes into a market dominated by sound-based devices. While these can rapidly convey information for the user, they have severe drawbacks: you can either plug in headphones to receive the message — which blocks surrounding sounds on which blind people rely for important cues about the world around them — or have it blasted out of speakers for all the world too hear. Tactile devices are available, but they’re usually bulky and prohibitively expensive.

“Though the introduction of refreshable Braille displays to the public aided in widespread increase in information accessibility, only 5% of visually-impaired people worldwide have the rare privilege of owning such devices. This is largely due to the price being an incredible barrier,” Dot explains.

“Thus, our company is working tirelessly to address the demand for an affordable actuator technology. Our team strives to apply it to the wearables concept and make it into reality.”

The company has been developing the Dot Watch for 3 years now with funding from some 140,000 backers. They plan to ship the first 100,000 devices starting this month, with the rest of the initial batch scheduled for next year.

The initial model will support English and Korean, with an estimated battery life of around 336 hours — this is obviously highly dependent on level of use. Depending on customer feedback, Dot says they can incorporate “other features such as voice recognition” or speakers.

“Our goal is to keep the price as close to each other no matter the currency and purchasing platforms.”

If you plan to get your hands on one, the first 1,000 units will be available in London retail.