Tesla Model 3: All About The Most Anticipated Car Ever

A glimpse at the future: the electric, self-driven vehicle of choice for the average American home.

by Tibi Puiu
in Feature Post, News, Science
A A

It accelerates with the rush of a hungry cheetah, comes with a massive 15-inch touching dashboard, and if a Japanese and German car ever had a baby, this is what it would look like.

Starting at $35,000 and with more than 400,000 pre-orders, the Tesla Model 3 is the eco-friendly sedan everyone’s been dreaming of for years. Some say the Model 3 will go down in history akin to Ford’s Model T which made vehicles affordable to the working class at the dawn of the past century. Back then, the horse and buggy were replaced by the combustion engine, which in turn will now have to make room for the future: the electric, self-driven vehicle of choice for the average American home. 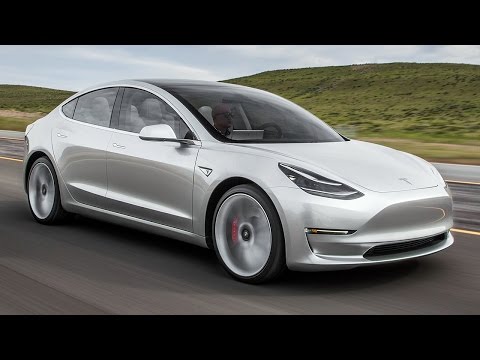 The Model 3 is a compact four-door sedan which was unveiled for the first time by Elon Musk on March 31, 2016, at the company’s design studio in Hawthorne, California. In its first week, Tesla garnered 130,000 pre-orders from prospective buyers who had to put $1,000 down. Right now, there are 400,000 pre-orders worth upwards of $10 billion — all for a car people barely got a glimpse of. No other automaker in history has managed to pull this off before. Not even close.

While the car’s back looks a lot like the Model S, Tesla designers seem to have taken the front end into a new direction. The hood is super low (we don’t have to worry about a combustion engine anymore) and the arched roof offers ample breathing space for the five passengers it can fit inside. Speaking of which, the roof is mostly glass apart from two beams offering a stunning view of the sky.

The designers also made a new door handle for the Model 3. These stay embedded in the doors but when the user gently pushes the metal, the handle pops out immediately.

As for size, the Model 3 stretches 184 inches (4.6 meters) from bumper to bumper making it about a foot (0.3 meters) shorter than the Model S. It’s still very roomy though, providing 400 liters of space in the trunk.

Here are the key specs you need to know, all confirmed by Tesla.

As for the money, the Model 3 starts at $35,000 before federal tax exemptions. You might be able to get it for less or more than this figure depending on where you live.

You’re probably wondering how the Model 3 stacks up against the Model S. Tesla gives us the gist with this graphical overview.

Pictures of the production version of the Model 3 were finally revealed on July 9 during a series of late-night tweets by CEO Elon Musk.

According to Electrek, this is probably Elon Musk’s own vehicle since he was gifted the first place in line by Ira Ehrenpreis, an early Tesla investor and board member, for his birthday. Musk seems to have gone with black this time, as well as bigger 19″ wheels. There are reportedly 100 possible configurations for the Model 3, a far cry from the 1,500 possible configurations for the Model S. Tesla has turned down the number of options for its customers so it can scale production at the maximum rate. The fewer options also come as an incentive for prospective buyers to hop on the Model S, which is roughly three times more expensive than the Model 3.

For now, there’s not much to look at. The car itself looks great but there are no official pictures of the interior or roof, and there likely won’t be any until the first Model 3 customers get their hands on it. For now, Elon Musk seems to be the only one enjoying the most anticipated car, well, ever.

Here are more pictures of the Model 3 prototype taken previously and released by Tesla.

There are also some great sneak peaks like this gallery posted by Reddit user “inamachineshop”. The gallery includes pictures of the now famous spartan dashboard of the Model 3. Many posted disappointing comments on social media complaining the dashboard doesn’t look appealing and not much seems to have changed since last spring when the first photos of the interior rolled out.

Tesla has one of the most brilliant marketing campaigns. And like all good marketing, Tesla has a found way to deceive its customers and not even make them mad.

What I mean by that is that everywhere you read, the Model 3 is priced at $35,000. You see, that’s a truthful lie. It does start at $35,000 but for that cash, you’re not really getting a Tesla — not the kind you wish for. This version is so bare it doesn’t have Autopilot, a self-driving feature which for many is the only reason they’d buy the car in the first place. If you want Autopilot, you need to dish out an extra $5,000. Want full self-driving features? That’s $3,000 extra. Want a nice interior and better range? That’s $9,000 extra. Oh, you don’t have a charger at home? Tesla will fix it for you for a nominal fee of $1,500.

After Elon Musk tweeted the first pictures of the Model 3 production unit, the CEO claimed the first thirty Model 3 customers will have their pre-orders honored at a special event held on July 28. From there on production will be incrementally ramped up from 100 cars in August to 1,500 in September and 20,000 by the end of December. If you’re only now looking to buy one, know that new orders will start shipping in 2018 but there’s a huge waiting list. Now, who wants one?