The work has only been tested in the lab but, so far, the results are encouraging.

by Alexandru Micu
in Biology, Chemistry, Health & Medicine, News, Science
A A

New research at Caltech paves the way for programmable cells.

The research team has developed a biological toolkit of proteins which can be mixed and matched to create circuits that program new behaviors into cells. As a proof-of-concept, the team designed and built such a circuit and added it to human cells growing in culture in the lab. The mechanism is meant to detect the activation of a certain cancer-causing gene — in which case it causes the cell to self-destruct.

One goal of synthetic biology is to enable living cells to learn new tricks, ranging from relatively simple ones, such as emitting light in certain conditions, to the more complex — for example, detecting and responding to disease. The most common way of doing this is by altering a cell’s genome. However, such alterations are permanent and will be passed on by the cell to its daughters, which is undesirable in several applications.

So, a lot of effort has been spent in synthetic biology laboratories across the world to develop less-permanent solutions, says Michael Elowitz, coauthor of the new paper, a professor of biology and biological engineering, and a Howard Hughes Medical Institute investigator. Such changes should be removable, he adds, or last only a certain time; they would be administered, carry out their intended function, then allow the cell to revert to its original state. Ideally, they should also be highly targeted: instead of affecting all cells indiscriminately, they could detect when something goes wrong on the cellular level and fix it accordingly.

Led by postdoctoral fellow Xiaojing Gao and graduate student Lucy Chong, the Caltech team developed a set of protein building blocks that they hope will enable synthetic biology to shift its paradigm towards these temporary changes. 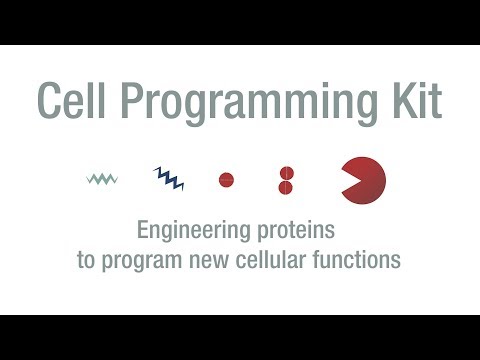 The proteins can be assembled in various combinations to produce biological circuits that can sense their environments and act if required. Just like electronic transistors can be linked to create the huge range of circuits today, the proteins can form systems that handle everything from signal processing to logical computation.

“One of the biggest challenges in biomedicine is specificity: How do you make a therapeutic that will affect only a particular type of cell? Then, how do you respond by modifying that cell in a very specific way?” says Elowitz.

“These tasks are challenging for drugs, but biological circuits could excel at them. Protein circuits can be programmed to sense many types of information, process it, and respond in different ways. In fact, the reason our cells usually work as well as they do is the incredible power of our natural biological circuitry.”

To prove that their approach works, the team constructed a biological circuit that can detect whether cells in a culture bear a cancerous gene and if so, destroy them. This circuit remained inactive when presented with healthy cells.

“This work is simply a proof of principle and we haven’t demonstrated these functions in animals yet,” Gao adds. “However, this framework could help us transition to using programmable, cell-based therapies as medicines.”

The work was enabled by the team’s efforts to engineer proteins that regulate (interact with) one another in similar ways, allowing them to act as interchangeable building blocks in the same mechanism.

The paper “Programmable protein circuits in living cells” has been published in the journal Science.