Physicists make waves by simulating black hole in a bathtub

Your childhood fantasies weren't all that off.

by Tibi Puiu
in News, Physics, Science
A A

Black holes are perhaps the most mysterious cosmic bodies in the universe. They’re elusive and packed with secrets. The physics that explains black holes isn’t any less esoteric either, such that only a few, if anyone, are aware of their inner workings. But sometimes, complex physics can be demonstrated with deceivingly simple, elegant experiments. Galileo Galilei proved in the 16th-century that all objects, no matter their size or weight, fall at the same speed by dropping balls weighing different amounts from the Leaning Tower of Pisa in Italy. Thomas Young proved light is a wave in 1803 by flashing light through two narrow slits on a board. And in 2017, at the University of Nottingham, UK, physicists proved the existence of a physical process around black holes using a specially designed bathtub.

Black holes are the most massive, most mysterious objects in the universe. A black hole does not have a surface, like a planet or star. Instead, it is a region of space where matter has collapsed in on itself. The gravitational pull of this region is so great that nothing can escape – not even light — which makes the black hole virtually invisible. But we definitely know these exist. We might even get the chance to image one — a black hole’s event horizon that is — after physicists made a radio observatory equivalent to the size of planet Earth for this purpose.

Most recently, a team led by Silke Weinfurtner at Nottingham’s School of Mathematical Sciences simulated a natural phenomenon called superradiance which is thought to occur around spinning black holes. The motion as a result of immense tidal forces generated by a black hole is thought to add energy to waves through dissipation. Any wave — which basically are energy — approaching the black hole will be affected and as such, the wave can be deflected away from the black hole instead of getting sucked in. In the process, it gains enough energy to exit the black hole’s ‘long arm’ and shoot back to space. That was mighty close!

Superradiance — the process of extracting energy from black holes — has been until not too long ago the stuff of theory. To demonstrate it in a live setting (or a very simplified version, of course,) Weinfurtner and colleagues partially recreated the environment around the black in a bathtub filled with water.

“Some of the bizarre black hole phenomena are hard, if not, impossible to study directly. This means there are very limited experimental possibilities,” explained Weinfurtner in a statement to the press.

“This research has grown from humble beginnings. I had the initial idea for a water-based experiment when I was at the International School for Advanced Studies in Italy and I set up an experiment with a bucket and a bidet. However, when it caused a flood I … quickly found a lab to work in!”

After many iterations, the researchers reached their final experiment setup consisting of a 10-foot-long (3m), 5-foot-wide (1.5m), and 20-inch-deep (50cm) bath. The black hole corresponded to — what else — the drainage hole in the center of the bath. White paper dots lined the bath to make it easier for the researchers to chart the motion of the waves around the analog black hole. A specially designed 3D air-fluid interface sensor recorded the superradiant scattering effect as a result of depth waves which the physicists generated at varied frequencies. 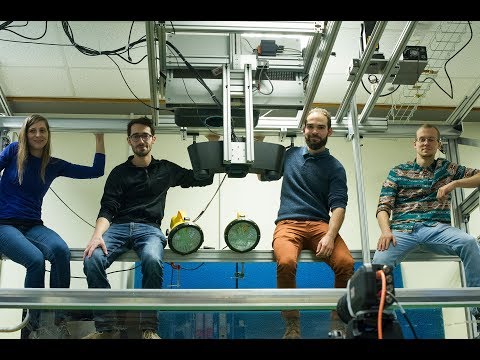 The team observed that plane waves propagating on the surface of water got amplified by as much as 20 percent after being scattered by a 6.25-centimeter deep fluid draining vortex. Believe it or not, thought definitely up to scale, the same principles must apply around a black hole the physicists claim.

“We observed that waves propagating on the surface of water can be amplified after being scattered by a draining vortex. The maximum amplification measured was 14% ± 8%, obtained for 3.70 Hz waves, in a 6.25-cm-deep fluid, consistent with the superradiant scattering caused by rapid rotation. We expect our experimental findings to be relevant to black-hole physics, since shallow water waves scattering on a draining fluid constitute an analogue of a black hole, as well as to hydrodynamics, due to the close relation to over-reflection instabilities,” the authores concluded.

The findings appeared in the journal Nature Physics.