by Tibi Puiu
in Offbeat, Science
Reading Time: 2 mins read
A A
Share on FacebookShare on TwitterSubmit to Reddit

A bridge or tunnel of some sorts which physically connects Asia with North America through the Bering Strait has been considered for many years now, but apparently each proposed project for such a titanic engineering feat has up to now remained in the fantasy stage. Recently, the Russian government put its seal of approval for the construction of the world’s longest tunnel spanning the Bering Straight at 64 miles (103 km), a project financially estimated at $65 billion today.

In 1905, Tsar Nicholas II dreamed of a bridge that would link North American with Asia and provide a direct rail route from Russia to the US. Nothing of the sorts could’ve been possible with the technology available a century ago, but the idea wasn’t bad at all, and hopefully it will become a reality in the not too distant future.

The center piece of the project will be a 65-mile-long tunnel, two times longer that the British Channel Tunnel, that would pass underneath the Big Diomede and Little Diomede islands in the Bering Strait, built in three sections and crossing the International Date Line, reconnecting the two land masses in the process.

Details released to the general public are still scarce, it’s pretty clear however that the tunnel would offer incredible economical and political advantages. The tunnel would have a highway, high-speed rail tracks, a fiber optic network and pipelines for gas and oil. The railway would actually connect the Siberian interior with the US east coast, resulting in a railway network across 3/4 of the Northern Hemisphere.

Besides the obvious infrastructure advantages, the tunnel would also be responsible for an impressive energy generation. Proposed tidal energy plants could provide 10 gigawatts of energy and a string of wind power fields could churn a constant supply of clean energy. 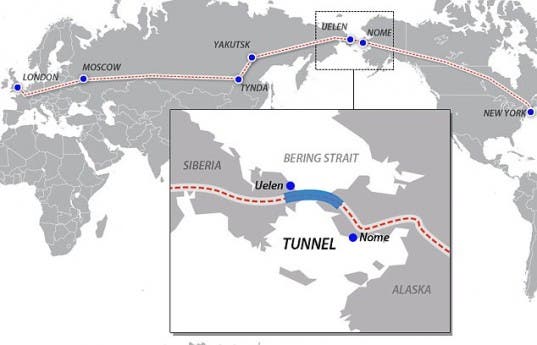 The private public partnership project, first shelved in 2007 and recently accepted by the Kremlin, will see the light of the day after good time though. It will take 15 years alone for the tunnel to be completed, theoretically, while the railway system which needs to be complemented on both sides of the Bering Strait might be complete by 2045. When and if ever operational though, it would mean a passenger will be able to board a train in London and catch a direct drip to New York – amazing by all means!

Despite such an ambitious project has been approved by the Russian government, on the US side, there doesn’t seem to be too much commotion around it, who seem to somewhat confirm the deal, but nothing really in an official manner. One thing’s certain though – the Russian’s build big!