This is not your typical online dating profile.

Ten years ago, biologists found a male Sehuencas water frog in Bolivia — and to this day, no other specimen belonging to the same species has ever been seen. Our frog called Romeo is still alone and might as well be the sole surviving member of his species, for all we know. But biologists aren’t ready to give up.

About a year after he was captured, Romeo started to call for a mate but those calls have slowed down over the years. Desperate times call for desperate measures. Yes, it was time for Romeo to try the online dating game. So a team of conservationists and researchers at Global Wildlife Conservation and the Bolivian Amphibian Initiative partnered with Match in order to find our frog a mate — for his own sake but also that of his entire species. No pressure, Romeo!

Match, the world’s largest dating business, has created a profile for the bachelor frog where prospective mates can learn more about Romeo. For instance, this handsome frog is more of a shy fellow, preferring to linger under rocks, peeking out only when his keepers are out serving him food — I actually know one or two ladies that match this description. Romeo’s favorite meals are earthworms, isopods, and snails. Romeo is also musical, bellowing a distinct breeding call.

“This campaign highlights the crisis that amphibians and even other vertebrate groups are facing in the world. Romeo is similar to some of the other species that came down to only one individual left. There were, and are, others like Lonesome George (the last male of the Pinta Island Tortoise), and Toughie (the last Rabbs’ Fringe-limbed Treefrog),” Arturo Muñoz, founder of the Bolivian Amphibian Initiative and associate conservation scientist of Global Wildlife Conservation, told ZME Science.

If Romeo isn’t exactly your type, you’re still more than encouraged to donate to his cause. Match and GWC hope to raise $15,000 by Valentine’s Day — money which will fund ten expeditions to the species’ known habitat but also in new places where biologists have never looked. Each donation will be doubled by Match until Valentine’s day.

The Sehuencas water frog (Telmatobius yuracare) was once commonly found on the bottom of small streams or rivers in the montane forests of Bolivia. But a combination of pollution, climate change, all topped by a contagious and deadly pathogen placed Telmatobius on the brink of extinction.

“The species lives in an amazing area, but it is also very difficult to access. The streams of the Bolivian mountain cloud forests are found among very steep slopes and fast rivers, so it can be difficult to get to the best places to search for the frog. In addition, the frog fungal pathogen chytridiomicosis swept through some years ago, and practically all species of the genus in this ecoregion are gone or near extinction. When there may only be small pockets of a species out there, it makes them very difficult to find,” Muñoz said. 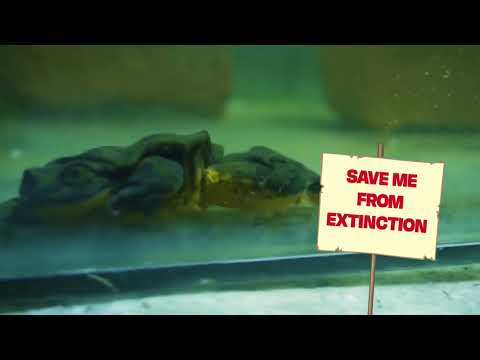 There isn’t much time left, however. There are plans to build a dam in the forested area which the Sehuencas water frog once called home and is named after. Besides looking for live specimens, like frogs and tadpoles, the scientists plan on sampling the water too in hope of identifying traces of DNA from the frogs. This way, even if no one spots them, but there’s evidence of their DNA, the team can renew their search afresh.

As things stand now, the future isn’t very bright for the Sehuencas water frog. If researchers do manage to find a female, however, there is still a chance for the species to make an unlikely comeback like the black-footed ferret, golden lion tamarin, and California condor have done in the past. What’s more, although the frog will technically become extinct if Romeo dies alone, the species won’t necessarily have to vanish.

“If all the efforts to find the species fails—which we really hope is not the case!—we are already coordinating with an Australian team that is interested in efforts to save this species through other means. They have the knowledge and tools to collect sperm and tissue for preservation, so we could explore artificial fertilization and even clonation. These are some options that we are starting to consider as a plan B to try to save this species from extinction. Realistically, if this frog dies, the species will likely go extinct. So these efforts—to find him a mate while also collecting sperm and tissue samples—represent our last best hope,” Muñoz said.