How a Sportsman’s Mind Works

by Mihai Andrei
in Psychology
Reading Time: 3 mins read
A A
Share on FacebookShare on TwitterSubmit to Reddit

Of all the skills that athletes and sportsmen possess, the most underappreciated ability is a sportsman’s mental acuity. While sports and games of all types require a great amount of physical ability, what separates a good player from a great player is how they analyze the game on the field. Let’s take a deeper look at this concept.

Some games, such as golf or poker, require a high level of mental strength. In golf, it is often said that a major portion of the sport is mental over physical ability. A golfer that is able to focus on his game and block out all distractions and focus on the current shot is much more apt to be successful than the standard golfer. Tiger Woods is a prime example used by many when talking about psychology in golf. Many feel that Tiger’s off-the-course problems have been haunting him to the point where one never knows what type of game Tiger will exhibit on the golf course.

Poker psychology goes a step further. Not only does a player need to be too strong mentally, but they must also be able to influence the mental state of other players. For example, in poker, the best hand does not always win. A bluff is a very powerful tool in the game as the person using it is betting on whether the person will have the cards and the courage to call. When playing against a weaker player, it is often correct to bluff frequently against them and takes advantage of their timid nature. 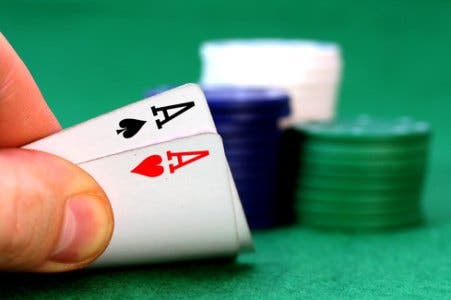 Strategy in sports and games is also much more of a mental endeavor. Coaches can draw up plays and tell the players what they should do, but much of this is a guideline to approach a situation that can be in flux. Take for example a soccer goalie. A great amount of what he does in a game is based on his physical ability to jump and block shots. However, in addition to those abilities, he must be able to analyze a developing play and then determine where to best position himself in order to make that play. As no two plays are the same, the goalie must be able to analyze each and every play and even his opponents’ abilities and strengths and make the choice on the fly as to how to best defend his goal.

Poker strategy is also a constantly evolving mental exercise. Each and every hand a player must analyze not just their cards, but also their position relative to the other players, their stack sizes, who is likely to raise with nothing, who will raise with just strong hands, who might be tilting, and then decide how he is going to play when the cards get to him. Also, figure in that around 30 hands an hour are played over a 10 to 12 hour day and this becomes a long and draining mental endeavor.

The mind of a sportsman has to be sharp and focused at all times if they want to be successful. They cannot sit back and simply react to what is happening in front of them. They must analyze, plan, and then act on decisions made during games that are constantly in flux. It is no surprise that the most successful sportsmen also tend to be among the brightest in the game, proving that sports are as much mental as they are physical.